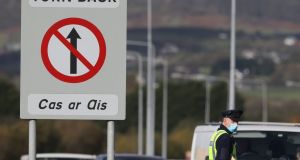 Gardaí at the border crossing between Northern Ireland and the Republic of Ireland, as they conduct checks asking people the reason for their journey. Photograph: Brian Lawless/PA Wire

Another 777 cases of Covid-19, 182 of them in Dublin, and seven more deaths from the disease have been confirmed in the State.

Confirming the latest figures on Friday evening, the National Public Health Emergency Team (Nphet) said that of the seven deaths reported, all occurred in October.

Eight-one of the latest cases were in Co Galway, 44 were in Co Wexford, 42 in Co Meath, and 41 in Co Cork, with the remaining 387 cases spread across the 21 remaining counties.

Nphet said that as of 2pm on Friday, 319 Covid-19 patients are hospitalised, of which 37 are in ICU, while there had been 24 additional hospitalisations as a result of the disease in the past 24 hours.

Dr Tony Holohan, chief medical officer at the Department of Health, said: “I appeal to everyone to behave as though you are a close contact. Stay at home, other than for essential reasons. Now is the time to use our reserves of energy and dig deep in our efforts to follow the public health advice – keep your distance, wash your hands and wear a face covering. Play your part to break the chains of transmission across families, neighbours and communities.”

Meanwhile, coronavirus has been identified in half of all schools in Northern Ireland since the beginning of term, according to the North’s Public Health Agency (PHA).

Data published by the PHA showed there were 2,030 confirmed cases of Covid 19 in schools between their reopening on August 24th, and October 18th, when schools closed for an extended, two-week half-term holiday.

Of the 1,789 school-based cases where a pupil/staff breakdown was available, 1,218 cases - or 68 per cent - were among pupils. This equates to 0.37 per cent of school-aged children in Northern Ireland.

There were 390 cases among primary school children, 803 among post-primary, and 25 among pupils attending special schools.

Five further coronavirus-related deaths were reported by the North’s Department of Health on Friday, bringing the total number of fatalities to 639. A further 1,252 cases of the virus were identified.

Since the beginning of the pandemic 32,286 cases of the virus have been confirmed in the North, 6,893 of them in the last seven days.

Almost 300 people with Covid-19 were being treated in hospitals in Northern Ireland on Friday, with 34 in intensive care.

The North’s Minister for Health, Robin Swann, apologised to patients and said he was “deeply disturbed” after some cancer procedures were postponed due to pressure of Covid-19 on the health service.

The Belfast Trust has also apologised after 106 planned surgeries and scopes were cancelled.

The minister said he was seeking assurances that the operations would be rescheduled as soon as possible.

“The more critically-ill Covid patients there are, the less staffing capacity we have in the system for non-Covid services,” Mr Swann said. “This is the dire reality that we find ourselves in.”

Health and social care trusts across Northern Ireland have warned that they are now seeing the consequences of the rise in cases which led to tighter restrictions being brought in throughout the North a week ago.

The Southern Trust has advised people to slow down while driving and avoid doing household tasks which might lead to injury because of the “extreme pressures” experienced at its hospitals.

“Currently, our hospitals are rightly gearing up for the latest coronavirus surge and we will not have the resources to provide our normal high level of service within orthopaedics,” said consultant Dr Ronan McKeown.

“If people do injure themselves, we may not be able to offer them the surgery they need at this time which may unfortunately lead to long term health consequences for those individuals.”

Chair of the Stormont Heath Committee Sinn Féin MLA Colm Gildernew said it was “unacceptable” patients were not receiving the urgent care they needed.

“Patients need certainty and guarantees that their procedures will go ahead, they should not be left feeling anxious and worried,” he said.

“The minister must immediately put plans in place to ensure cancer patients are receiving the urgent care and treatment they require.”

Deputy chair of the committee DUP MLA Pam Cameron, said the North’s Executive should consider calling in the armed forces to ease the strain on healthcare staff.

Separate data released on Friday by the Northern Ireland Statistics and Research Agency (Nisra) recorded 27 coronavirus-related deaths in the week ending October 16th, compared to seven the week before.

It puts the death toll recorded by Nisra at 942, more than a third higher than the total of 610 deaths reported by the North’s Department of Health (DoH) over the same period.

The Nisra figures are higher than those recorded in the daily statistics released by the department, which focus primarily on hospital deaths and include only people who have tested positive for Covid-19.

Nisra includes all deaths were coronavirus is mentioned on the death certificate, and the person may or may not have tested positive for the virus.

Covid-19 was included on the death certificates of 441 care home residents, or 47 per cent of all deaths involving coronavirus, Nisra said.

Almost 1,300 “excess deaths” - deaths above average for the corresponding period in previous years - have been registered in Northern Ireland in the last 29 weeks.