Three arrested as cannabis worth €7m is seized at Dublin Port 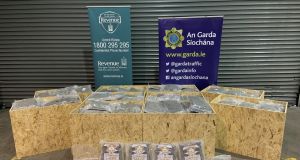 Revenue customs officers have seized cannabis with an estimated street value worth €7 million at Dublin Port as part of an investigation into criminal gangs.

The illegal drugs arrived in a container from Spain and amounted to 352kg of cannabis.

The seizure was made with the assistance of Revenue’s mobile X-ray scanner and detector dog Kelly.

It was a result of a joint operation conducted by Revenue’s customs service and members of An Garda Síochána through the Garda National Drugs and Organised Crime Bureau.

International police were also involved in the operation.

Three men aged 31, 47 and 49 were arrested by gardaí following the seizure and they are currently being detained under section 2 of the Criminal Justice (Drug Trafficking) Act, 1996, at Garda stations in Dublin.