No deadline set for restoration of Shelbourne Four statues 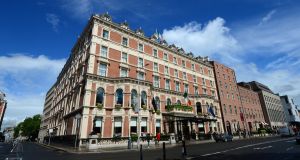 The statues were removed in July in the mistaken belief that two of them were representations of slave women. Photograph: Dara Mac Donaill/The Irish Times

No date has been set for the restoration of the Shelbourne Hotel statues because of the delicate nature of the worked needed to be done to them.

Dublin City Council has confirmed that it has received notice from the Shelbourne Hotel that it intends to reinstate the four statues to their plinth at the entrance to the hotel.

The statues were removed in July in the mistaken belief that two of them were representations of slave women.

The hotel St Stephen’s Green in Dublin is owned by US multinational property company Kennedy Wilson and operated by the Marriott Group.

In response to a number of public complaints, the city council served an enforcement notice on the hotel alleging a breach of planning permission.

On Wednesday hotel management wrote to the council stating its intention to restore the statues.

The council stated: “A submission was received from the owner’s architectural advisors on the 23rd of September 2020 indicating their intent to refurbish the statues and reinstate them in due course. This will take time due to the delicate conservation works required.”

A spokeswoman for the council confirmed that no deadline has been given for the restoration “due to the delicate nature of the conservation work required”.

Kennedy Wilson commissioned University College Dublin art historian Professor Paula Murphy to examine the statues. An expert on sculpture, she has concluded that they are not depictions of slaves.

The statues will be restored to their plinths once they are cleaned, as there are layers of paint that have to be removed. Their restoration will include a plaque explaining their backgrounds.

The decision to restore the statues has been welcomed by the former attorney general and Minister for Justice Michael McDowell who was one of those who objected to their removal in the first place.

Mr McDowell said he was “very pleased that common sense and the law have prevailed in relation to the Shelbourne Four”.

He added: “Our architectural and cultural heritage cannot become hostage to the sensibilities of people who form ideological impressions on a flawed understanding of historical facts.

“People are free to choose to become “woke” but they may not impose their opinions on others. Nor is our history and culture subject to excisions in the pursuit of political correctness or ideological conformity.

“Our monuments and our preserved structures are worthy of conservation even if they reflect ideas and people with different ideas from those of some or even most of the present generation.

“The Shelbourne Four were not slaves, did not demean women, and did not give any cause for offence to the great majority of reasonable people.”

The art historian Kyle Leyden who uncovered the original catalogue which demonstrated that two of the statues were not representations of slave women, said there may still be issues around them.

He told Morning Ireland: “Firstly, there can be no doubt that they formed part of what became a 19th century artistic fetishisation of the culture of the East as licentious and sexualised.

“Secondly, regardless of how true the slave identification actually was, the fact that there’s clearly a very widely held misconception that they might have been slaves might in itself be enough to justify a call for their removal.”

UCC colonial historian Dr Donal Hassett welcomed the proposal by the hotel to include a plaque putting the statues in their historical context.

“Hopefully the plaque to accompany them will acknowledge their connection to cultural project of imperialism,” he tweeted.

“We need a greater diversity in these discussions. It can’t just be left to experts from academia and heritage sector. Heritage always means different things to different people and this needs to be acknowledged.”