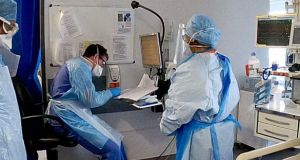 Questions around staffing were kicked down the road on Thursday as the plan was launched. File photograph: The Irish Times

An unprecedented situation calls for an unprecedented level of funding for this year’s winter plan, published by the Health Service Executive. And so this year’s budget is 15 times larger than the amount allocated to last winter’s plan.

But given the challenge posed by Covid-19, there is a still a question mark over the adequacy of the plan to get the health service through “a winter like no other”, as HSE boss Paul Reid has forecast matters.

And even if the €600 million given by Government to the HSE for its plan is enough, will the health service be able to make good use of the money in the short time covered by the plan?

In a country where it take two years on average to appoint a consultant, how are the extra staff to be found in a timely manner to service the extra beds promised? And with international movement so heavily restricted at present, where will the HSE find these extra staff, given Ireland’s traditional reliance on doctors and nurses sourced overseas?

Questions around staffing were kicked down the road on Thursday as the plan was launched, with the focus placed firmly on the additional resources to be made available. It is clear, too, that long-running talks with the private hospitals are continuing on the provision of surge capacity during the pandemic, and the diversion of long-waiting patients off public waiting lists and into private facilities.

About half the headline figure of 1,500 new beds are already in place in one form or another, but this should still amount to the biggest leap forward in terms of capacity for many years. And in providing more care in the community, be it home help or diagnostics for GPs, it represents another move in the direction of Sláintecare, the roadmap for the health service future agreed (but not costed) by all political parties some years ago.

The increase in home help hours is particularly striking, and welcome, though again it is not clear where the extra staff will come from.

What did Stephen Donnelly say?

This year’s plan is a slim 30-page document compared to the plans of previous years, and thus lacking in the level of detail previously provided.

Minister for Health Stephen Donnelly was honest enough on Thursday to admit that despite promises in the plan to process thousands of extra procedures waiting lists could end up longer next spring, rather than shorter. He also stated bluntly that the parts of the service are not operating “at full whack”, despite the protestations of some, and these needed to change.

Riding the twin horses of beating Covid and reforming the health service is going to be a difficult trick for a new Minister to pull off, given the unpredictability of the situation. A bit of luck – a mild winter, low flu rates – might help. Here’s hoping.