Cases in Limerick, Leitrim and Tipperary have fallen in recent days, officials say 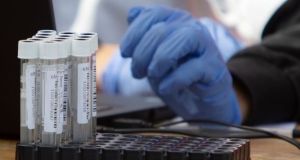 So how are we doing overall?

Like many other European countries, Ireland is experiencing another rapid increase in Covid-19 cases. There has been a slight slowdown in recent days but it is too soon to know whether this is a definite trend.

And where are the problem areas?

Most attention has focused on Dublin and Donegal, now both on Level 3 of the Government’s framework plan, compared to level 2 in the rest of the country. The rate of infections in the capital is currently so high that Germany has declared it a risk area for travellers.

Case numbers in Louth are climbing more slowly, but have broken the 100 mark (106.3 cases per 100,000 of population) and so the country is attracting specific warnings. Dundalk/Carlingford seems to be the hot-spot within the country.

Waterford, which for months had the lowest virus rates in the country, saw cases soar after a meat plant outbreak last month. Case numbers dropped slightly in recent days, giving rise to hope that the surge there may be over.

Is there any good news in this?

There is some. Cases in Limerick, Leitrim and Tipperary have fallen in recent days, with public health officials giving the credit to greater adherence by their populations to the new restrictions.

We should also remember that case numbers aren’t everything. They’re also not comparable to the figures from the first surge, as we’re testing more now and therefore picking up a greater proportion of infections. They’re also milder cases than before, because most are among the young.

But aren’t more patients ending up in hospital?

Correct. The number of Covid-19 patients admitted to hospital has increased four-fold in a month, albeit from a low level - from 20 to 88. ICU admissions are also rising at a similar rate, to 16. One in four ICU admissions recently are aged under 45; it is not known how many of these had underlying conditions.

Treatment options for hospitalised patients have improved since the early days of the pandemic but some at least will have poor outcomes.

Why are hospital numbers rising?

You may well ask. One reason is that more older and vulnerable people are getting infected, even if most cases are in the young. About half of those admitted to hospital in recent weeks were aged 65 or older. Public health officials say it is impossible to stop the virus leaking into nursing homes and other vulnerable areas when rates of transmission increase in the general population. Nonetheless, European figures point to Ireland having one of the highest rates of infections among older age groups at present.

There has been speculation about other counties being put on level 3, or even Dublin being moved to level 4. There have also been calls for a more granular approach, so the worst-affected parts of counties could face added restrictions. A more likely outcome is further extension(s) of current restrictions, just as the national lockdown in the spring, and Kildare’s lockdown, were “rolled over”. Sub-county changes seem unlikely at this stage.

The Government’s framework plan set out a long list of criteria for triggering a change of level, beginning with incidence rates. Ultimately, the approach is formulated, not by an algorithm, but by officials on the National Public Health Emergency Team. NPHET recommends; the Government decides.