Newborn baby dies after being found in toilets of Rotunda 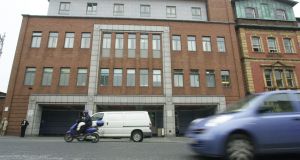 A new born baby died at the Rotunda Hospital days after being found in the toilets. Photograph: The Irish Times

A file is being prepared for the coroner’s office after the death of a newborn baby at one of the country’s main maternity hospitals.

The tragic incident, which took place earlier this month at the Rotunda Hospital, is being treated as a sudden death, the Garda said. “A file will now be prepared for the coroner’s office as in all cases of sudden deaths,” a spokesman said.

It is understood that gardaí were called by staff after the baby was discovered in the toilets of the hospital. The child was on life support for several days.

The baby’s mother had presented at the hospital when she was full term, it is thought. A spokesman for the hospital said: “Management at the Rotunda wish to confirm the recent discovery by hospital staff of an occurrence that culminated in the tragic death of a new born baby.

“This matter was reported to the gardaí and is now the subject of an ongoing investigation on which the hospital cannot make any further comment.”