One person dies of cocaine overdose every week, figures show 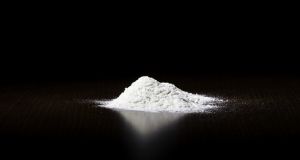 One person died of cocaine overdose every week in 2017, according to latest figures which highlight a rise in deaths related to the drug’s use.

Data released by the Health Research Board (HRB) show 376 people died of drug “poisoning”, or overdose, during the year - 125, or one third, of which involved alcohol.

The index also recorded 410 deaths as a result of trauma, defined as instances such as hanging, or medical reasons such as cardiac events among people who use drugs, whether or not the drug had a direct impact on the cause of death.

“A cocktail of drugs was present in three in five poisoning deaths,” said research officer Ena Lynn. “Mixing drugs is known to cause more complications and increases the risk of overdose.” Drug “cocktails” were present in three of five fatal cases.

Typical profiles of those who died were men aged in their 30s or 40s taking such a mixture of drugs, many of them legal including methadone, alcohol and benzodiazepines.

“There were 53 cocaine poisoning deaths in 2017, which equates to one death per week,” said Ms Lynn.

“We found cocaine was often mixed with other drugs, in particular benzodiazepines and methadone. Given the sharp increase we have seen in the demand for treatment for cocaine in recent years, we hope that these figures highlight the risks associated with cocaine use.”

By comparison, heroin was implicated in 77 cases; prescription drugs in 253 cases (including Benzodiazepines, the most common prescription drug, in 139 cases); and the opiate substitute methadone in 95 cases.

Commenting on the data, Merchants Quay Ireland, the drug support organisation, said the total number of 786 deaths was an increase of 25 per cent on 2008. It also said 41 per cent of those who died following drug injection were in Dublin City.

“Two people a day die from a drug-related cause, and there are deeply worrying increases in the harm caused by cocaine and by prescribable drugs,” she said.