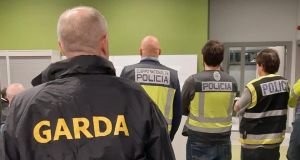 In a joint operation with Spanish police, Gardaí from the National Immigration Bureau (GNIB) arrested a man and a woman, aged 45 and 22, in north Dublin on Tuesday. Photograph: Garda Facebook

Gardaí say they have uncovered a sophisticated organised crime operation involving the forgery and sale of travel documents which are used by large numbers of non-EU citizens to travel to Ireland.

In a joint operation with Spanish police, Gardaí from the National Immigration Bureau (GNIB) arrested a man and a woman, aged 45 and 22, in north Dublin on Tuesday and seized a large amount of false travel documents, phones, financial statements and cash.

A third man (47) was arrested last Thursday in connection with the scheme. All three are currently being detained for questioning in Blanchardstown Garda Station.

They are suspected to be members of a Georgian organised crime group which has been forging EU documents in Ireland and selling them to non-EU citizens seeking to gain entry to the Ireland and the UK. The Irish documents are distributed to a network across Europe using courier and postal services.

It is not know if the documents were sold to people smugglers or individual migrants.

Gardaí say the documents, which include passports, national identity cards and drivers’ licenses, have been used by a large number of “non-Europeans” who have attempted to travel to Ireland in recent years using the documents. There is also evidence customers have used the documents to gain entry to other EU States as well as Iceland.

It is the first time Gardaí have confirmed details of the operation which officers have dubbed “Operation Mombasa. ”

It comes a month after Taoiseach Leo Varadkar said he believed many migrants are travelling to Ireland from Georgia and Albania using false documents and that this is driving the recent 60 per cent increase in the numbers seeking asylum here.

Operation Mombasa involves police forces from several countries but focuses on the activities of criminals based in Ireland.

On Monday the Spanish Policia Nacional conducted searches in Barcelona as part of the operation, arresting one suspected gang member and seizing a significant amount of evidence including false documents, flight tickets and bookings and receipts from parcel delivery services.

Related investigations under the co-ordination of Europol are also ongoing in Italy, France, Germany, the UK and Finland where members of the gang are resident. Authorities in the United States are also involved.

Gardaí say many of the gang members are themselves using false documents to continue to live in Ireland.

The operation began in late 2018 after Icelandic and Spanish authorities arrested Georgian nationals living in those countries for unrelated offences. Follow up inquires established the suspects had sourced false travel documents from Ireland.

The Garda was alerted and a team of detectives began their own investigations under the coordination of a Senior Investigating Officer from the GNIB. An incident room was established and garda began securing evidence from banks, money transfer services and parcel delivery services.

This allowed them to identify the gang’s network in Ireland and “their modus operandi,” a spokesman said.

Suspicious parcels destined for non-EU nationals living in EU countries were seized from An Post and found to contain false travel documents.

On May 29th, 2018 a suspected member of the gang was arrested by gardaí. Subsequent enquires established there were two families from Georgia who were living in Dublin and producing false travel documents before distributing them across Europe.

“This criminal organisation, in the production and distribution of false documents assisted Non-European Nationals circumvent immigration laws for the purpose of entering Ireland and the UK illegally,” the Garda spokesman said.

“Investigations have established that a large number of non-Europeans have attempted to travel into this jurisdiction utilising their false documents.”

It is understood some individuals travelled legally from Georgia to mainland EU countries under the Schengen agreement. They would then source fake Irish documents which would allow onward travel to the UK and Ireland, neither of which are part of the Schengen free-travel zone.

Today’s arrests were the second major search operation to take place under Operation Mombasa. On October 30th last, gardaí carried out 13 searches of premises in a co-ordinated operation with police forces in several other EU states. A large amount of evidence was seized.