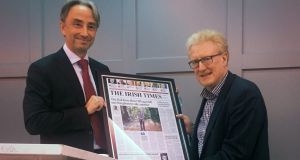 Former Irish Times parliamentary correspondent Michael O’Regan was presented with a special front page by editor Paul O’Neill on Tuesday to mark his recent retirement from the newspaper after almost 40 years.

A familiar voice on radio, O’Regan qualified from the first national course in journalism in the College of Commerce in Rathmines in 1972 and worked with The Kerryman and The Corkman before joining The Irish Times in 1981. He became a Dáil reporter in 1988 and was a stalwart of the newspaper’s political coverage for more than 30 years.

Former editor Geraldine Kennedy said his great contribution to journalism, most especially Irish Times journalism, was that he retained his sense of “country” and never lost his values.

“Michael’s journalistic asset was that he loved and consumed politics. He liked politicians. Unlike many of the younger generation in today’s digital world, he liked mixing with them . . . There was never a complaint made that Michael was biased. He was always seen as fair.”

In September, O’Regan wrote about his experience of dealing with two diagnoses of cancer, but also about the birth of his first grand-daughter.

“Michael has had a tough time over the last few years though I’m glad to say he has bounced back with determined resolve,” O’Neill said.

In retirement, O’Regan continues to appear regularly on Radio Kerry.

1 ‘It was pitch black’ - Rescued teenager describes night afloat with her cousin in Galway Bay
2 Aaron Brady, the man who said with pride he was a cop killer
3 Garda killer Aaron Brady will be almost 60 by time he leaves prison
4 Housing activists assist tenants to re-enter property following eviction
5 Schools urged not to demand clean uniforms each day
Real news has value SUBSCRIBE