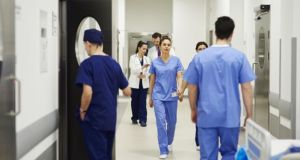 New talks are to take place next week in a bid to resolve a threatened strike by public health specialists over pay and contracts.

The public health specialists, who are represented by the Irish Medical Organisation (IMO), deferred a series of scheduled work stoppages earlier this month due to the surge in Covid-19 cases. However they said they would review their position at the end of January.

Public health specialists currently earn about € 113,000. Hospital consultants with an existing type-A contract – which permits them to treat only public patients – have a pay scale that ranges from €141,026 to €195,653.

Separately on Wednesday the Department of Public Expenditure said that the proposed new public service pay agreement which it negotiated with public service trade unions in December was “final”.

The Department of Public Expenditure confirmed that it had held talks on Tuesday about the proposed new accord with representatives of staff associations which are not affiliated to the Irish Congress of Trade Unions. These included representatives of gardaí, military personnel, psychiatric nurses, hospitals consultants and dentists.

The Department of Public Expenditure said that it along with officials from relevant Government departments had met with a range of staff associations under the auspices of the Workplace Relations Commission.

“The purpose of the meeting was, in line with standard practice, to address queries regarding the terms of the proposed public service agreement – ‘Building Momentum’ – and next steps. The proposed agreement was concluded in December and is final.”

A spokesman for the Psychiatric Nurses Association (PNA) said that it had written to the Workplace Relations Commission expressing its dissatisfaction with how the process leading up to the negotiation of the new public service agreement had been conducted, the level of engagement it had had and on how the final agreement had been reached.

The PNA said that Department of Public Expenditure had said it would respond to queries it had raised.

Associations outside of the Irish Congress of Trade Unions have complained that they were not directly involved in the negotiations that lead to the new agreement.

Garda chief lauds courage of officers at anti-lockdown protest 22:01
Biden ‘unequivocal’ about Belfast Agreement support as Dublin and London row over NI protocol 21:47
More than 40% of those on probation had mental health diagnosis, report shows 21:46
Sharp Dáil exchanges during debate on land agency Bill 21:22
Leaving Cert pupils to get six days to select between exams or accredited grades 21:09