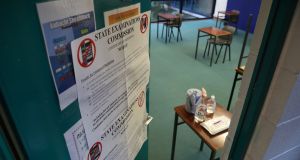 Most secondary school students want a choice between receiving calculated grades or sitting the Leaving Cert exams this year, according to a survey. Photograph: The Irish Times

Most secondary school students want a choice between receiving calculated grades or sitting the Leaving Cert exams this year, according to a survey.

The findings are based on a survey of 20,000 secondary school students conducted online by the Irish Second Level Students’ Union (ISSU) earlier this month.

When asked to rank options in order or preference, a majority of respondents (55 per cent) listed their first preference as a choice between calculated grades or sitting in-person exams in June.

The next most popular option was calculated grades with ongoing assessment (25 per cent).

The current plan to hold the Leaving Cert exams in June attracted 4 per cent support as a first preference.

ISSU president Reuban Murray said the results showed that students want clarity and it was time for the Department of Education to “learn from the mistakes and delays of last year”.

“We need to plan now for what might be happening regarding exams and the reopening of schools in the coming weeks and months,” he said.

“We’re asking for compassion for the thousands of students who - up until now - have been asked to carry on as normal in what are completely abnormal times.

“It is clear that we need to try something different, and we’re ready and willing to contribute to this with our recommendations in this report.”

He said the union will present the findings to Minister for Education Norma Foley at a Department of Education advisory group meeting on the State exams this Friday.

A spokesman for Ms Foley said earlier this week that it remains the Government’s firm intention to hold a “traditional” Leaving Cert in June. Teachers’ unions have also called for the June exams to go ahead.

However, Ms Foley has signalled that if school do not reopen soon, it will pose challenges in holding traditional exams.

Separately, there has been an increase of just over 5,000 - or about 8 per cent - of third level college applications this year.

The Central Applications Office (CAO) said a total of 66,457 had made their application in time for the reduced-fee deadline, up by 5,070 on the same time last year.

The “normal” application deadline expires at 5.15pm on Monday, February 1st, while a “late application” facility will open on March 5th and close on May 1st at 5.15pm. However some restrictions apply, particularly in the case of mature applicants.

CAO spokeswoman Eileen Keleghan said applicants do not need to enter courses at this stage and are only required to supply their personal details, tick a box or boxes on the qualifications and assessments section, make a payment and create a password.

“We urge all mature applicants, applicants interested in restricted courses, and those applying for the Dare or Hear schemes to apply before February 1st at 5.15pm in order to avoid restrictions.”

Meanwhile, the ISSU said it will advocate for clarity over the future of the Junior Cert exams.

The survey was carried out through the ISSU’s 480 member schools, while students from all schools were also invited to input to the survey. The vast majority of respondent were senior cycle students.

Alicia O’Sullivan, the union’s education officer, said the size of the survey clearly showed the preference of students.

“We have listened and we now have a clearer picture of what students want, and we want to work constructively with the Department and other stakeholders to make sure that all students are catered for, and that their welfare is prioritised over anything else in the coming months,” she said.