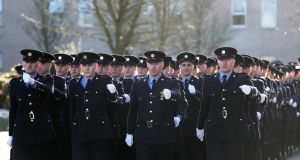 The Garda Representative Association said 75 trainees who were sent to work in Garda stations after their training programme at the Garda College was curtailed due to the Covid-19 crisis are experiencing financial hardship. File Photograph: Brian Lawless/PA Wire

Garda trainees currently working on the frontline are receiving just 30 per cent of the starting salary in place for members of the force, their representative body has maintained.

The Garda Representative Association (GRA) said 75 trainees who were sent to work in Garda stations after their training programme at the Garda College was curtailed due to the Covid-19 crisis are experiencing financial hardship.

It said a further 71 trainees, who had been further along in their training, were attested as gardaí earlier this week and are now on the higher probationary garda pay rate. However, the other 75 trainees remained on lower level payments.

The association said that instead of receiving starting salaries of about €30,000 per year plus allowances, the 75 trainees had been sent to stations on €184 per week. The was also taking on the additional costs including commuting and/or renting accommodation. It said while at the Garda College the trainees would have had free lodgings and meals in the canteen.

“ Since entering Garda training, they have been paid the paltry sum of €184 per week which is about 30 percent of the starting salary for a garda, ” GRA president Frank Thornton said.

“Late last year, the GRA secured a daily allowance of €21.86 to provide for the cost of travel and subsistence but many of these members still experienced huge financial hardship, in particular with loan repayment schedules, including mortgages.

“These members were due to be attested by now but the closure of the Garda College meant they did not complete their training. While we are pleased the members newly attested are now being treated fairly, there is another group of 75 trainees still in a difficult position,” said Mr Thornton.

“The extension of their training programme due to the closure of the college has put these trainees gardaí in severe financial difficulty because they were expecting to be on the higher probationer salary by now.”

He said there is no training plan for these members at the moment due to the skeleton service being provided in the Garda College.

“While we have no difficulty with the attestation of reservists, the precarious position of the 75 trainee gardaí still on 30 percent of starting salary should be the priority for An Garda Síochána. These members are only four weeks behind in their training compared to the newly attested members but could be waiting months before they get the salary they expected to be receiving.”

His comments came as the Government faced continuing pressure in the Dáil over payments for student nurses.

The Department of Health declined again on Wednesday to comment on a review which Minister for Health Stephen Donnelly told the Cabinet had concluded there was no evidence to support claims that student nurses were being exploited while on their clinical placements in hospitals. It said it did not comment on unpublished reports.