Department to get Mother and Baby Homes Commission archive next month 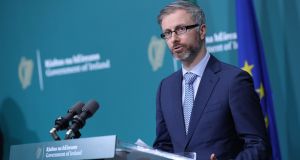 Work on legislation to allow survivors of mother and baby homes access to information about their birth will not delay other efforts to provide personal information, Minister for Children Roderic O’Gorman has pledged. Photograph: Julien Behal Photography/PA Wire

Work on legislation to allow survivors of mother and baby homes access to information about their birth will not delay other efforts to provide personal information, the Minister for Children has pledged.

In the ongoing Dáil debate about the Commission of Investigation report into 18 mother and baby and county homes, Roderic O’Gorman re-iterated that an early outline of the Information and Tracing Bill would be ready by the end of March or early April.

But he said the Commission’s archive of some 60,000 records would arrive in his department by the end of February . “I wish to ensure that people can access personal information contained within the archive in line with GDPR,” he said.

Many survivors and TDs condemned the report for failing to accept their direct testimony and Minister of State Mary Butler acknowledged their unhappiness with the report’s findings.

The survivors “feel it does not accurately reflect their testimonials and their lived experience”, she said. “We must accept their criticisms. These are the women who lived in the homes.”

“These are the women who gave birth in the homes and saw their babies die or be taken from them.

“It is hard, as a woman, to read the report, knowing what childbirth is like, and to think of the fear, pain, hurt and desolation these young women and girls, some of them only teenagers, went through and what childbirth was like for them, only to have their babies wrenched from their arms,” she said.

Sinn Féin Galway West TD Maireád Farrell said it was very clear from the report that there is “potential criminal investigation and that must be examined”.

Hitting out at claims that society was to blame, Ms Farrell said “society does not collectively decide to banish its women to cruel institutions unless powerful and influential forces such as State and Church facilitate such actions”.

Labour’s Sean Sherlock became visibly upset as he read from one of the reports of Department of Local Government inspector Alice Litster about what occurred in the homes.

“The greater number were miserable scraps of humanity, wizened, some emaciated and almost all had rash and sores all over their bodies, faces, hands and heads,” Mr Sherlock quoted.

Mr O’Gorman has written to Minister for Further and Higher Education Simon Harris to ask him to consider naming a scholarship after Ms Litster “to mark her efforts to shine a light on what was happening in these institutions over many years”.

Social Democrats TD Jennifer Whitmore called on the Minister for Children to State explicitly his opinion of the report.

“Do you agree that there was no evidence that women were forced into mother and baby homes by the Church or the State authorities” as stated by the Commission in its report.

“Do you agree that there was no evidence of abuse,” she asked.

“ I urge the Minister and the Government to clearly outline on the public record their opinion of the report.

“They do not need to set it aside but I want to know - and the survivors deserve to know - what they think of what is in that document,” she said.

Fine Gael TD Jennifer Carroll MacNeill also became emotional when she spoke of references to the women and children in the homes as second-class citizens.

They were not even second-class citizens, she said. “Sometimes stripped of their very names and given house names, they were a caste apart. They were untouchable, even by their own parents.”

Sinn Féin spokeswoman on children Kathleen Funchion described the report as “one of the greatest miscarriages of truth ever produced.

“Survivors had so much expectation and perhaps optimism that this report would right some wrongs, hold to account those responsible for so much hurt and injustice” but it was a “disgrace”.

“Not only is it a collateral disappointment for survivors; it is also disrespectful in the extreme as it attempts to contradict their accounts.”