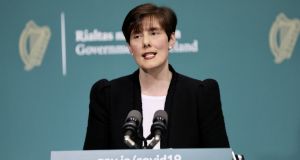 When the Department of Education live-streamed a briefing with public health experts over reopening special schools last Monday, they expected a few thousand teachers and special needs assistants to tune in. In the end, about 17,000 logged on.

Within minutes, the comments section was flooded with a deluge of fearful and vitriolic messages.

As deputy chief medical officer Dr Ronan Glynn and others advised that schools were safe settings, the sentiment among school staff was very different.

“Sorry now, don’t patronise use any longer”; “SCHOOLS ARE NOT SAFE - STOP RISKING OUR LIVES”; “blue flu”; “I AM LIVID”; “teachers completely ignored”; “They have proven they don’t care”; “Strike strike now”; “You have hung us all out to dry and risking our lives hope you are all proud of yourselves”;

The event was aimed at easing the concerns of staff members – but it had the opposite effect.

It became a lightning rod for the fear and anxiety among members over the planned reopening of schools for special needs pupils.

Rarely in the history of education in Ireland has there been an issue which has been so polarising.

The Department of Education, on one side, was determined to reopen special education for vulnerable pupils; on the other, unions insisted that it was not safe for their members to return.

On the sidelines, families of up to 18,000 children with disabilities have watched on, hoping for a resolution.

On Wednesday, relations on all sides were damaged.

In a sector which relies on partnership, trust and co-operation to get things done, there are genuine concerns over the extent to which bridges have been burned.

The atmosphere stands in stark contrast to last Friday.

Union leaders and Department of Education officials signed off on guidance for reopening on schools the following Thursday, subject to certain health concerns being addressed.

“Everyone was positive and on the same page. The only real question seemed to be if schools would open on Thursday or a few days later,” says one source present at the meetings.

Within hours of the department publishing the agreed guidance on Friday evening, the depth of opposition to school reopening online was clear.

The ferocity caught union leaders off guard and soon they were backtracking. Fórsa and the Irish National Teachers’ Organisation (INTO) ended up issuing statements within 24 hours which emphasised that nothing had been formally signed off, raising fresh doubt about schools reopening.

Teachers and SNAs said the mantra that “school is safe” was based on outdated public health data from last year when transmission rates were lower.

They also pointed to what they said was a contradiction between the public health advice on schools and the general advice to the wider public to reduce contacts.

In addition, they argued that there was a lack of clarity over what would happen to vulnerable members and what meaningful access there would be to childcare for those who had to return.

The Department of Education, meanwhile, said the public advice was clear: while it was unsafe to reopen all schools to one million children and staff due to mixing, experts advised that school environments themselves remained safe.

Given that reopening special education involves just 4 per cent of the school population, it was a proportionate move.

In addition, they said guidance was being developed this week on arrangements for vulnerable staff and access to subsidised childcare teachers and SNAs.

Ultimately, the school reopening plan was formally abandoned on Tuesday night when both the leadership of the INTO and Fórsa said their staff were not convinced that schools were safe.

The Government could have forced the reopening of schools, but the consensus was that such a move would have proved divisive, chaotic and damaged the prospect of reopening schools generally.

Tempers have since frayed and the rhetoric has hardened.

Minister for Education Norma Foley uncharacteristically accused the INTO of being “incredibly disingenuous” on Wednesday morning.

Minister of State for special education Josepha Madigan controversially compared the situation facing children with additional needs not attending school to the mother and baby homes.

Union leaders, meanwhile, were being put on the defensive in media interviews on Wednesday.

They were being asked to clarify the level to which virus transmission rates must fall before there is a return to school.

There is also an uncomfortable reality for the INTO: members in the North are working in special special schools, yet in the Republic, the union has advised that it is not safe to return.

In the meantime, the focus on reopening of schools across the board looks likely to shift towards a potential return date of February 1st. Any decisions will, as usual, need to be backed up by public health advice.

In advance, however, temperatures will need to drop and the rhetoric will need to soften before there is any meaningful engagement.