Ireland can act as bridge between US and EU, as presidential visit likely, says Taoiseach 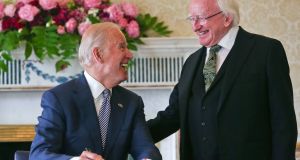 Then US vice president but now president Joe Biden with President Michael D Higgins at Áras an Uachtaráin in 2016. Photograph: Colin Keegan/Collins Dublin

President Michael D Higgins and Taoiseach Micheál Martin have congratulated Joe Biden on his inauguration as US president.

“I write to offer my most heartfelt congratulations as you assume the Office of the President of the United States of America,” Mr Higgins wrote.

“There can be no greater honour than to be given the trust of one’s fellow citizen’s to lead and no greater responsibility then to vindicate that confidence by having their interests, their welfare and their aspirations at the forefront of all that we do.”

Mr Higgins added: “The US has been a true friend to Ireland in so many ways. Your own friendship and support for so many years has been invaluable. Ireland, of course, has made its most valuable contribution to your great land by providing so many of our daughters and sons. The descendants of some turned out to be rather fine Presidents! May I wish you be the best in all that you do.”

"There can be no greater honour than to be given the trust of one's fellow citizens to lead."

President Michael D. Higgins has written to President Joe Biden, offering his "heartfelt congratulations" as @JoeBiden assumes the office of President of the United States. pic.twitter.com/grdf6hBVYN

Also, a historic day as @KamalaHarris is sworn in as the first woman Vice President of the USA. I wish her and President Biden every success in meeting the challenges ahead.

“I look forward to Ireland the US working closely and constructively together in all the needs to be done . . . Sabina and I sincerely hope that we will have the privilege and the pleasure of welcoming you and Jill to Ireland once again, as soon as circumstances permit,” Mr Higgins said.

Mr Martin also extended his congratulations to Kamala Harris who was sworn in as vice president to Mr Biden and welcomed the prospect of the US’s return to the Paris Climate Agreement, saying Ireland could now act as a bridge between it and the EU.

“On behalf of the government and people of Ireland, I wish to offer my heartfelt congratulations to president Joe Biden on his inauguration,” he said in a statement issued shortly after Wednesday’s ceremony.

“The inauguration of a new US president is a moment of hope and renewal in US political life.”

The Taoiseach was quick to underscore Mr Biden’s strong ties to Ireland – his ancestors left counties Mayo and Louth during the Famine.

“He will remember their descendants’ hard struggle as they made their way in and their contribution to the United States. It is the story of Irish-America,” Mr Martin said.

“I hope he will also be conscious of the great pride we in Ireland take in his immense achievement. He is one of us, part of our global family.”

With hopes of yet another presidential visit to Ireland now high, the Taoiseach said he looked forward to welcoming Mr Biden and working with him in the areas of global peace, climate change, economic partnership and stability.

“I also wish to pay tribute to vice-president Kamala Harris, who has created history today, and who will help form a diverse and formidable administration,” he said.

“I believe Ireland can be a bridge-builder between the United States and the European Union as we all share common values in securing democracy, peace and economic development.

“I am enormously heartened that among his first actions in office will be a re-commitment of the US to the Paris Agreement on climate, and a resetting of the relationship with Europe. ”