New dictionary not the last word on Irish lexicography 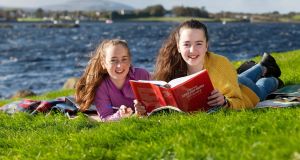 Niamh and Sarah Kidd from Kinvara, Co Galway, with the new Concise English-Irish Dictionary, the first of its kind in over sixty years. Photograph:Andrew Downes

Living languages are shaped by their environment and as the lives of speakers change the way they communicate and express themselves evolves.

In the intervening 60-odd years, new Irish words have been introduced to account for the impact of technology and reflect the changing social, economic, political and cultural forces that influence the words we use.

For example, entries in the new dictionary include burqa - búrca, pandemic - paindéim and the incorporation of phrases such as “to Google something - rud a ghúgláil”.

Some might scoff at the introduction of words such as gúgláil but it is not a new phenomenon: the verb "hoover" which has been in use for decades to describe the act of using a vacuum cleaner of course comes from the name of the company Hoover.

While this process of iterative change is not unique to the Irish language there are few places in the world where the systematic dominance of one language, English, over another, Irish, has been as conspicuous.

And in terms of syntax and language structure, the influence of English on Irish has become even more marked in recent decades - something which is reflected in the new dictionary.

“In the case of Irish the direct influence of English is becoming more pronounced in the vernacular not just in terms of individual words but also in terms of the structure and syntax of the language,” says Pádraig Ó Mianáin, chief editor of the new dictionary.

“For example, the phrase ‘to throw in the towel’ has been translated as ‘an tuáille a chaitheamh isteach’ and ‘éirí as/géilleadh’ in the new dictionary. The first example here is a direct translation of the English phrase whereas the second example could be seen as more traditional Irish.

“Of course, a language that’s as globally dominant as English is constantly generating new terms and concepts and it’s important for Irish and for Irish dictionaries to respond and maintain relevance in adequately covering current affairs and trends,” he says.

But it is not all one-way traffic.

Words such as garda, café, croissant, entrepreneur, rucksack, galore, macho, tsunami, sliotar, brogue and puck are commonly used in English but are loanwords, borrowed from other languages, not least among which is Irish.

One challenge faced by lexicographers is determining a word’s primary meaning at a given moment.

“The prevailing practice in modern dictionaries is to present word meanings in order of frequency of use rather than presenting them according to the evolution of those meanings from the original root form,” says Ó Mianáin.

The new dictionary also tries to reflect the extent to which technology has transformed our society.

It has revolutionised how people interact and the dictionary now offers examples of words that once had a specific meaning but which have come to mean something different over a relatively short period of time.

“It’s not so much that a word’s meaning changes but more so that a word might gather additional meanings along the way,” explains Ó Mianáin.

“For example, when de Bhaldraithe’s English-Irish Dictionary was published in 1959 the prevailing meaning of the word ‘text’ was that which you’d find in a book or manuscript. This word has evolved since then, taking on new meanings and even becoming a verb, especially in the realm of social media and communications.”

And as new words emerge, old words disappear and words are borrowed from other languages and incorporated.

So when it comes to compiling a dictionary, what factors determine what words are included or left out?

“Priority in the first instance is given to word frequency in a language corpus,” says Ó Mianáin.

“From there certain sets of words - such as colours, months, and countries - are included regardless of frequency, and ultimately the keen judgement of editors and translators is relied on to make the final decision,” he adds.

Some 9,000 copies of the new Concise English-Irish Dictionary have been printed and copies will make their way into schools, libraries and private homes around the country and beyond.

An earlier online version of the dictionary (foclóir.ie) was published in 2013.

Up until then students depended on a dictionary that was over 50 years old and which didn’t include commonly used words such as "computer", "internet" and "supermarket".

“Since 2013, the New English-Irish Dictionary has been online and now attracts nearly 2.5 million users worldwide per annum,” says Ó Mianáin.

“This is a comprehensive contemporary dictionary that is suitable for users of all levels of Irish, and is particularly useful to those learning Irish in the education system.

“The printed version Concise English-Irish Dictionary makes the language even more accessible especially for those who are not as technically proficient or indeed those without internet coverage.”

While work on this print version of the English-Irish dictionary has ended, the focus will now shift to the compilation of an Irish-English dictionary and an Irish-only dictionary.

At 1,800 pages and with more than 30,000 entries, 85,000 word senses and 1.8 million words, the Concise English-Irish dictionary is an historical document too as it marks a moment in time in the ongoing relationship between Ireland’s two official languages; Irish and English.