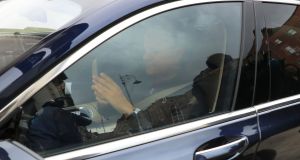 Tánaiste Leo Varadkar said in a statement that he provided a draft copy of the new GP agreement to the then president of the NAGP as he hoped to use his influence to encourage all GPs to accept it. Photograph: Nick Bradshaw

The controversy involving Tánaiste Leo Varadkar originated in moves by the previous government to extend services in general practice and a long-running campaign by family doctors for the reversal of funding cuts applied over previous years.

A key priority of the government was to extend free GP care to additional cohorts of children and to have more types of care provided in the community to alleviate pressure on hospitals.

GPs, on the other hand, argued they had experienced funding cuts of more than €120 million during the austerity years and were not in a position to take on additional services without greater State investment.

The overall contract between the State and GPs was, at that stage, about 50 years old and there was a consensus that it needed to be updated.

However, negotiating a new deal with GPs is a legally tricky business.

Family doctors are not employed by the State or the HSE, but rather are independent contractors who, under competition law, are not supposed to negotiate collectively in relation to fees.

Following a High Court case on competition issues, a framework agreement had been reached between the IMO (Irish Medical Organisation) and the government which set out how such negotiations between GPs and the Department of Health/HSE could be conducted.

The IMO, as the signatory to this framework agreement, was considered by government to be the party with which it would enter negotiations in relation to publicly funded contracts for GPs.

At the time there was another organisation representing family doctors, the National Association of General Practitioners (NAGP).

It was not a signatory to the framework agreement, nor was it affiliated to the Irish Congress of Trade Unions, unlike the IMO.

The Department of Health had agreed in 2016 that it would consult with the NAGP about developments. However, its negotiations were with the IMO.

This initial process did not go anywhere and a revised engagement began in mid-2018. Sources who were close to this initiative said this weekend the IMO was solely involved.

On April 3rd, 2019, The Irish Times reported that the government was close to finalising a €200 million agreement with family doctors which would involve the introduction of new services for medical card patients with chronic illnesses such as diabetes or cardiovascular conditions.

It would also involve the restoration of funding in return for co-operation with reforms. The IMO would also drop its objection in principle to the government’s plans to extend free GP care to more children, potentially up to age 12.

On April 5th, the IMO confirmed it had reached a €210 million deal with the government.

It said the agreement would see “the long-sought reversal” of the controversial financial emergency or FEMPI cuts of €120 million (plus €10 million in pension contributions) imposed on general practice at the height of the financial crisis as well as an additional fund of €80 million which had been secured for the management of medical card patients with chronic disease in the community.

The following day Mr Varadkar, the then taoiseach, formally announced the agreement and said it would lead to the phased introduction of free GP care for children up to age 12.

Mr Varadkar in his statement on Saturday said he provided a draft copy of the new GP agreement to the then president of the NAGP, Dr Maitiú Ó Tuathail, on a date between April 11th and 16th.

He said he hoped to use Dr Ó Tuathail’s influence to encourage all GPs to accept it, including those represented by NAGP.

The full document agreed between the government and the IMO had not been published at the time, rather just the main points.

Sources said a process continued for a number of weeks tidying up elements of the text. It is understood there were no major changes of substance to the agreement between the IMO’s announcement on April 5th and the eventual finalisation of the deal with the IMO on May 8th and its publication by the Department of Health a week later.

Ironically, within weeks of receiving the document from Mr Varadkar, the NAGP itself had imploded amid concerns about governance and spending at the organisation.

While it is now known that the leadership of the NAGP had the agreement document, the organisation said in a statement on April 28th that many doctors were waiting to see the details before deciding to renew their membership and that this was creating financial difficulties.

On April 29th in a further statement it said: “It is now three weeks since the announcement of the new contract and to date there is no sign of any contract or contractual document. Until we see the contract document, it is impossible to advise members.”

The IMO did not comment over the weekend about the controversy. However, former IMO president Dr John Duddy said Mr Varadkar’s actions undermined the concept of negotiating with licensed trade unions.

IMO council member Dr Anthony O’Connor also criticised Mr Varadkar for not respecting the negotiations but IMO GP committee member Dr Mait Ó Faoláin said on Twitter that at the time Mr Varadkar had provided the document to the NAGP, the details were already known to hundreds of family doctors.