Tour operator: ‘This year has been a complete wipe out’ 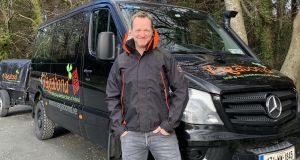 September is normally one of the busiest months for tour operator Vagabond, but this season was completely wiped out due to Covid-19, according to its managing director.

Rob Rankin said the continued lack of overseas tourists is creating a “huge amount of uncertainty” for him and his business.

The latest figures from the Central Statistics Office, published on Thursday, shows that overseas travel, both in and out of the country, was down almost 75 per cent in September, when compared with the same month last year.

Last month was the first month overseas travel has declined since April, when the first wave of the Covid-19 pandemic was at its highest in Ireland, the CSO said.

Mr Rankin has 16 tour vehicles, 25 guides and planned to bring 3,000 people on tours around Ireland between March and October. However due to reduced tourists, they “haven’t managed to deliver a single tour”.

“It’s been a complete wipe out. It’s devastated our business for the entire year. This year is just a write off. Next year will be about survival. As far as I can see, we’re the hardest hit. Very few other businesses have literally been wiped out by 100 per cent,” he said.

“The domestic season is quite short, but the international season is a lot longer. May, June and September are normally three of our busiest months. We deal mainly ourselves with the American market. I think we all hoped it was going to die out, but by mid-season we realised it was probably going to be a write off.”

He said he is also seeing an impact on bookings for next year, as consumers are concerned about the feasability of travel before a vaccine. Adding to that, while income has diminished, there are still costs that have to be paid.

“We still have fixed overheads. We have a payroll, we have seven people in the office on reduced hours, we have vehicles to pay for as well, and then we have all the other, usual costs associated with a business as well,” he added.

He hopes the €55million continuity grant that Fáilte Ireland will be administering will be allocated to businesses in the inbound sector.

Pat Dawson, chief executive of the Irish Travel Agents’ Association, said many travel agents are “living on fumes” due to the lack of international tourism.

“September is normally busy, as busy as July, particularly for the older people. They don’t travel in the peak of the hot weather so normally wait until September,” Mr Dawson said.

He said travel agents “are open, but we are closed” because there is no business coming in.

“There has been negative business since March. We have to look after the hundreds of thousands of people who had booked in and get refunds of course, which we’re still battling with,” he explained.

Eoghan O’Mara Walsh, chief executive of the Irish Tourism Industry Confederation (ITIC), said the continued reduction in tourism is posing as “existential threat” to many businesses.