Kite surfer dies after getting into difficulty off north Dublin beach

Man (30s) believed to have drowned at Dollymount Strand on Saturday 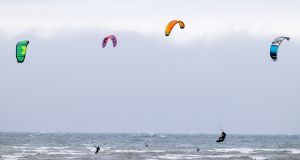 A man in his 30s has died while kite surfing at Dollymount Strand, north Dublin, on Saturday morning.

Emergency services were called to an incident at the beach shortly after 9am. The man is believed to have gotten into trouble in the water and drowned.

He was removed from the water and pronounced dead at the scene by paramedics.

His body has been removed to the Mater Hospital, where a post-mortem examination is to take place at a later date.

The beach, which is located near Clontarf, is a popular kite-surfing spot.

It has also been busy in recent weeks with large numbers of people out walking during the nationwide lockdown.