Drugs and cash confiscated in Tipperary and Dublin 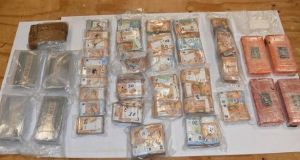 Gardaí have charged the man, aged in his 40s, who was arrested in connection with a seizure of more than €1 million in suspected drugs and cash in Thurles, Co Tipperary, on Friday.

He is due to appear before Limerick District Court on Monday at 10.30am.

The narcotics and cash were uncovered in a field in outside Thurles. During the search on Saturday night, gardaí seized suspected cocaine worth an estimated €650,000 cocaine and about €370,000 in cash.

The man was arrested at the scene and was being held at Templemore Garda station under section 2 of the Criminal Justice (Drug Trafficking) Act, 1996. The suspected drugs will be sent for analysis.

Separately, crack cocaine and Diazepam tablets worth nearly €270,000 and more than €16,000 in cash were seized following a search of a house in Ballymun in Dublin on Friday.

Gardaí said during the search €14,000 worth of crack cocaine, approximately €255,000 worth of Diazepam tablets, €16,400 in cash and three mobile phones were seized in the Santry Cross area. A man in his late 30s was arrested and is being questioned at Ballymun Garda station.