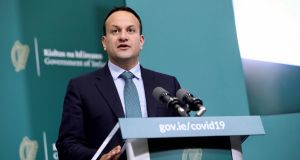 A statement on behalf of Tánaiste Leo Varadkar said the decision to send a copy of the draft agreement was ‘honouring a political commitment previously made by the Government.’ Photograph: PA

Tánaiste Leo Varadkar has rejected allegations that he acted unlawfully in providing a copy of a draft pay deal agreement with the IMO to a rival representative group for doctors.

In a statement on Saturday, Mr Varadkar said he provided a copy of the agreement to Dr Maitiu O’Tuathail, president of the National Association of General Practitioners, on a date between 11th and 16th April 2019.

In the statement sent on behalf of Mr Varadkar, a spokesman for Fine Gael said an article published in The Village magazine about him was “inaccurate and grossly defamatory.”Mr Varadkar said he has sought legal advice on the contents of the article.

The statement said “extraordinarily inaccurate claims had been made by Village Magazine.”

They said the magazine was “manifestly wrong” to suggest the Tánaiste may have breached the Official Secrets Acts, 1963, when he shared a draft of the proposed contract with the IMO with the NAGP.

“The ambit of that Act is limited to persons holding a “public office”... the definition of “public office” expressly excludes members of either House of the Oireachtas.”

The statement said it would also be wrong to suggest that the Criminal Justice (Corruption Offences) Act 2018 was breached.

The spokesman also said it would be “wholly wrong to suggest a breach of the Dáil members’ Code of Conduct 2002.”

“There is no credible suggestion that the provision of the agreement by the taoiseach to the president of the NAGP was for “personal gain”.

“On the contrary, the motivation of the Taoiseach was clearly to advance Government policy, and it was to further the prospects of the Agreement being accepted by General Practitioners which was entirely in the public interest.”

The statement adds, that “by April 6th, 2019, the substance of the agreement had been extensively press released and was already in the public domain, and it was available to the IMO who had negotiated it”.

The deal, ultimately worth more than €200 million, was the result of months of negotiations and rolled back recession-era cuts to GP funding.

The agreement between family doctors and the government on reforms to general practice in return for investment was negotiated between the Irish Medical Organisation (IMO) and the Department of Health/HSE.

However, when finalised in May 2019, the terms were offered by the HSE to all GPs operating the medical card scheme irrespective of which organisation to which they belonged.

In his statement Mr Varadkar says: “The then Taoiseach did provide a copy of the Agreement to Dr Ó Tuathail on a date between 11th and 16th April 2019”. “The Agreement was provided to Dr Ó Tuathail, as President of the NAGP in circumstances where the Taoiseach believed that the deal was a positive one for General Practitioners that the Government wished to see implemented”.

“He hoped to use Dr Ó Tuathail’s influence to encourage all GPs to accept it including those represented by NAGP.

“In this regard, the Government had publicly committed to keep the NAGP informed as to the progress of negotiations on the Agreement.”

The statement said that the decision to send the agreement was “honouring a political commitment previously made by the Government.”

“It is important to emphasise that by that point, the agreement had been agreed and its content had been publicly announced previously.”

Mr Varadkar said he accepted that the “provision of the agreement by an informal communication channel to the president of the NAGP was not best practice and he regrets that he did not ensure that it was provided in a more appropriately formal manner.

“There was however, nothing in any way unlawful about the provision of the Agreement to the President of the NAGP.”

On Saturday, when contacted for comment by The Irish Times, Mr O Tuathail said he had no comment, and that he had not yet had a chance to read the Village article. He said he would send a detailed comment, which had not been received at the time of publication.

It is understood that Mr Varadkar will make himself available for questions on the issue in the Dáil early this coming week. Mr Varadkar was also in contact with Taoiseach Micheál Martin on Saturday about the emerging issues.

A Government source said the Taoiseach’s view was what had happened was not best practice and not appropriate.

In a statement the Green Party noted the statement from the Tánaiste and called for him to give a full and detailed account to the Dáil, and allow sufficient time for questioning.

“It is clear from what has been revealed that the passing on of sensitive information in this manner was not appropriate. The timelines and the full impact of the disclosure on all involved needs further scrutiny.”

Earlier on Saturday, the Opposition called for clarity from the Tánaiste. Aodhán Ó Ríordáin, the Labour Party spokesperson on enterprise and trade, called on Mr Varadkar to make a statement in the Dáil on Tuesday and also “clarify and confirm whether what is reported happened”.

He said that if true, the act could have exposed the State to a claim for damages. Sinn Féin spokeswoman on enterprise and trade, Louise O’Reilly, said on Saturday afternoon that Mr Varadkar had “serious questions to answer” regarding the allegation

Government backbencher Jim O’Callaghan, the Fianna Fáil TD for Dublin Bay South, said on Twitter that the article was a “serious and specific allegation… about the disclosure of a confidential Government document. The Tánaiste should make a statement responding to the allegation and clarifying the situation.”

The Social Democrats said they “view with extreme concern allegations made in the current edition of the Village magazine concerning the Tánaiste”.

The backdrop to the controversy was a process under which the Government would reverse the cuts imposed on general practice during the austerity years and see family doctors taking on more services.

Negotiating with GPs was a tricky issue. Family doctors are not employed by the State or the HSE but rather are independent contractors who under competition law are not supposed to negotiate collectively in relation to fees.

A framework agreement had been reached between the IMO and the Government which set out a roadmap for how such negotiations between GPs and the Department of Health and HSE could be conducted. The IMO was the sole negotiating body on behalf of general practitioners.

Under earlier talks the National Association of GPs was to be consulted about the process.

However as part of a revised process which got underway in mid 2018, the IMO was solely involved, according to sources who were close to the initiative.

On 3 April 2019 The Irish Times reported that the Government was close to finalising a €200 million agreement with family doctors which would involve the introduction of new services for medical-card patients with chronic illnesses such as diabetes or cardiovascular conditions.

It would also involve the restoration of funding, cut from general practice during the austerity years, in return for co-operation with reforms.

The report said the proposed accord would see the IMO dropping its objection in principle to the Government’s plans to extend free GP care to further cohorts of children, potentially up to age 12.

Two days later on April 5 the IMO issued a statement that it had reached a €210million deal with the Government for GP services.

It said the agreement would see “the long-sought reversal of the controversial FEMPI cuts of €120 million (plus €10 million in pension contributions) imposed on General Practice at the height of the financial crisis as well as an additional fund of €80 million has been secured for the management of GMS Patients with Chronic Disease in the community.

The following day on April 6 the then-Taoiseach Leo Varadkar formally announced the agreement at an event in a general practice clinic in Cabra in Dublin at which he said it would lead to the phased introduction of free GP care for children up to age 12.

The document agreed between the Government and the IMO was not published at the time, rather just the main points. Sources said a process continued for a number of weeks tidying up elements of the text although it would seem any changes were minor.

Finally on May 8 the IMO finalised the overall agreement with the Department of Health and the HSE and put the document out to ballot .

It was formally published by the HSE around the same time.