‘It’s been a struggle’: Garden centres hoping to turn the Covid-19 corner 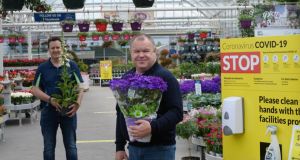 Nigel McEvoy (left), operations manager, and Carl Jones, owner, of Jones Garden Centre, Donabate have been making their centre safe for customers in the ongoing pandemic ahead of their reopening. Photograph: Alan Betson/The Irish Times

“There have been tough times before,” says Carl Jones, the third generation owner of what is now Jones Garden Centre in north county Dublin.

“In my father’s time, in the 1970s, he was borrowing money at 14 and 15 per cent. The 1980s weren’t great either, then we came through the last bust. But this is like something we’ve never experienced before. The uncertainty. It’s totally different.”

Just as he was gearing up for their busiest time of the year, Jones was forced to pull down the shutters in March under government orders to control the spread of the coronavirus.

It wasn’t a decision he agreed with, arguing his 3,000 sq m centre - built up over decades from the family’s pick your own fruit farm near Donabate - was well able to safely accommodate customers and help keep people at home gardening.

After a few days uncertainty, he decided to continue trading on a delivery only basis. Such was demand, that he had to hire an extra van, adding to his two existing delivery vehicles.

“Colour, instant colour” was what Irish people wanted in the lockdown. Geraniums, begonias, osteospermums, petunias, foxgloves, lupins and the like. Fruit and vegetables also sold well in the earlier stages of the crisis.

Not everyone knows their plant names and it was a painstaking process going through email orders, phoning the customer to make sure that was indeed what they wanted, then pulling them together and dispatching.

Garden furniture and barbecues also sold well, with couriers brought in to deliver to further reaches of the country.

But getting what people wanted proved a problem. “The suppliers panicked and started selling to supermarkets. It was tough for us to get plants because they’d all gone to supermarkets and garages.”

While he tries to buy Irish, he says he had to order overseas for some plants he could no longer source at home. There is a hint of tension at the need to look elsewhere.

It was absolute bedlam in the UK when the garden centres reopened there, people queuing out the doors. I can’t see it being any different here

But Dónall Flanagan, a nursery specialist with Teagasc, says Irish growers were thrown a lifeline by the supermarkets. Many would have been in a “dire situation” but for the “colossal demand” from the big multiples.

“That first week of March all the growers were really heavily in to their overdrafts,” he says.

“It’s a very scary time if you can’t see any sales coming. They were looking at Spain and Italy where people could barely leave their homes. Big contracts were being cut, for events that were in the weeks ahead. It was carnage.”

One big bedding grower had a major retail chain cancel an order for all their summer bedding - about a third of his turnover for the year.

“In the event, three weeks later the chain phoned him and asked to reinstate the order if possible. But that was three weeks he was living on his nerves, not knowing how he was going to pay his debts. That sense of doom was just immense on nursery owners.”

There are only around 20 Bord Bia-approved nurseries in Ireland which can supply supermarkets, which demand quality assurance cover. Another 150 smaller nurseries supply garden centres, hardware shops, service stations and co-operatives.

Around 2,000 people usually work in the horticulture industry - deemed essential workers during the crisis - but many of those are hired in for a short 12-week period to cover the peak season.

Flanagan says many of those had yet to be hired at the start of the lockdown so they didn’t qualify for the pandemic unemployment payment scheme.

About half the usual number of workers in the sector had paid employment this season, he estimates.

Sales for growers “went off a cliff”, he says, most of them struggling to continue with “zero to 20 per cent” of their usual trade, during what should have been their boom time.

With highly programmed cycles of production and a relatively short shelf life for most bedding plants, there were stories in the industry of growers dumping unsold stock or even giving it away free of charge.

There were few customers buying plants for St Patrick’s Day and Mother’s Day this year.

But as gardens centres reopen on Monday, the industry is hoping the good weather will continue and that it has turned a corner.

“People are not going on holidays,” says Flanagan. “They’ll be having their dinner parties in the garden, so I think there is going to be an effort made to spruce them up and have a bit of colour in it.”

Growers are busy again but, like other industries, some staff have difficulties because of health conditions as well as child or elderly care responsibilities.

“Hopefully they can make up ground and write it off as a bad year, but they lost the peak of their season. And it’s a very short season,” adds Flanagan.

At his garden centre near Donabate, Jones has widened the aisles, erected signage, hand sanitiser stations, social distancing barriers as well as screens around checkouts in anticipation for the “bedlam” he expects when they open the doors again.

“It was absolute bedlam in the UK when the garden centres reopened there, people queuing out the doors. I can’t see it being any different here. A lot of people are ringing already about opening hours.”

Jones won’t reveal his lockdown losses - sales were a “fraction” of what they should be - but he says Covid-19 health and safety measures for reopening have cost him well over €10,000.

Staff also had to undergo online training for going back to work.

Only two people per trolley will be allowed in (no children) and customers will have to play their part, he says.

“They can’t be coming in expecting to spend half an hour with a staff member, planning their garden, because that is not going to happen. We can’t be with someone for more than 15 minutes.”

Jones, too, is hoping people robbed of their holidays this year will instead “feather their own nest” and help him make up sales after a disastrous spring.

“It’s been a struggle, it’s been tight, it’s been stressful,” he says. “But we just have to get through it.”