The vast majority of Covid-19 testing and contact tracing will be completed within the target time of three days from tomorrow, according to HSE chief executive Paul Reid. Video: RTÉ 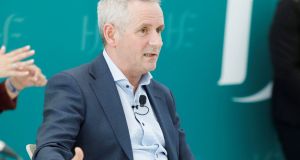 The chief executive of the HSE Paul Reid said the health service can go into next week and the easing of restrictions with ‘a level of confidence’. Photograph: PA

The vast majority of Covid-19 testing and contact tracing will be completed within the target time of three days from tomorrow, according to HSE chief executive Paul Reid.

Last week, 80 per cent of tests were being completed from swabbing to completion of contact tracing within four days, against a target of 85 per cent within five days, he said.

From next week, the HSE expects to be able to complete “end to end” testing and contact tracing within three days in 90 per cent of cases, Mr Reid told the weekly HSE briefing.

Almost 98 per cent of people tested for Covid-19 will get the result by text in two days or less, he said, as the process of informing people of negative results is automated.

The positivity rate has fallen to 2.4 per cent, down from a high of 24 per cent at an earlier stage of the pandemic, meaning no contact tracing is needed for the vast majority of people tested.

Mr Reid said on Sunday swabbing tests were now being scheduled “practically always” on the same day as they were sought.

The system was now geared up to provide 100,000 tests a week, in 41 labs in Ireland and Germany, according to Mr Reid, had an average turnaround time of two days or less.

With a limited reopening set to start on Monday Mr Reid urged the public to continue to “stay safe” and said everyone still had a collective duty of care through their actions to protect loved ones and healthcare workers.

He said the health service can go into next week and the easing of restrictions with “a level of confidence”. The number of Covid-19 patients in ICU, at 54, is 67 per cent compared to early April and there had been a “significant downward climb” in confirmed cases in hospital.

The HSE now wants to scale up non-Covid services but this would be happening in an “unpredictable environment”, he said.

In relation to the controversy over the reporting of cases by the Mater hospital, Mr Reid said the HSE has received a draft outline report on the issue.

Mr Reid said the legal requirement to report data had been met by the hospital, and that contact tracing there has been completed.

However, the information from the hospital that was submitted to the labs did not have full details - including full names of cases.

‘’Therefore it did not allow the HSE to compile a complete correlation of the data at the appropriate time,’’ Mr Reid said.

HSE chief Clinical Officer Dr Colm Henry has sought assurances from all hospitals that the data submitted to labs is complete.

Currently, the HSE is performing an average of 4,000 tests per day. Chief operations officer Anne O’Connor said a testing sweep in nursing homes and mental health units has been completed.