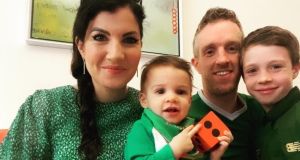 Brian and Kathy Egan with their sons Harry and Luke. Photograph: Brian Egan

The Government should prioritise the legalisation of surrogacy in this country so couples who have struggled to have a baby no longer need to travel abroad to access the service, a leading international campaigner on surrogacy has said.

Sam Everingham, founder of the Growing Families charity, says the legal uncertainty around surrogacy in Ireland should be “urgently addressed” and called for assisted human reproduction legislation to be introduced.

His comments follow reports that dozens of babies born to surrogate mothers in the Ukraine were being cared for by nurses in hotels and hospitals because their parents cannot enter the country to collection them due to Covid-19 border restrictions.

Irish family law solicitor Annette Hickey confirmed none of the babies who appeared in Friday’s BBC report were Irish but said she was conscious that the images were “horrifically upsetting” for parents going through surrogacy.

A number of Irish families are currently trying to secure permission to enter Ukraine ahead of the birth of their child while around ten Irish couples have successfully travelled to the country during lockdown.

Mr Everingham, who lives in Australia and has two daughters born via surrogacy, expects thousands of babies will be left in Ukraine without parents within six weeks if the international community does not negotiate clear travel measures to enable parents to collect their infant.

Mr Everingham, whose charity provides guidance to Irish families going through surrogacy, commended the Department of Foreign Affairs for the support it had offered couples trying to get to Ukraine during the pandemic for the birth of their child.

However, he warned that forcing couples to go abroad for surrogacy was “no longer sustainable”

“For Ireland, Ukraine is huge for surrogacy, it’s probably the most popular destination for heterosexual couples in Ireland.

But Ukraine does not confer Ukrainian citizenship on these babies so they remain stateless until they have Irish citizenship.

“The arrangements for doing surrogacy abroad are very tenuous and Covid has left these delicate arrangements open to many problems.”

In Ireland there is currently no legislation around human reproduction and under Irish law, the surrogate mother is considered the legal mother of the child. The Government has approved the drafting of a Bill on assisted human reproduction which is scheduled to be passed in 2021.

Sarah Jane Ryan from the National Infertility Support and Information Clinic (NISIC) hopes the recent media coverage around surrogacy during the pandemic will prompt the Government to push forward legislation in this area.

The recent reports from Ukraine have been “extremely distressing” for Irish families going through surrogacy, said Ms Ryan, adding that the charity has advised families with any worries about the process to contact their solicitor.

“There’s a huge emotional impact with surrogacy. Couples don’t embark on this lightly; it’s generally something they consider after they’ve had a pretty hard time in their journey to parenthood. Surrogacy is complicated and you just wish it could be easier for them. Now Covid has further complicated the process.”

Brian Egan and his wife Kathy travelled to Ukraine in May 2019 to meet their son Luke who was born to a surrogate mother. After giving birth to her first son Harry, Kathy suffered seven miscarriages.

“It’s not a situation anyone dreams of,” Mr Egan told The Irish Times. “You plan to have a certain number of kids and life’s not like that. It’s not a decision you take easily, it’s so uncertain.”

The Egans started to research surrogacy in Ukraine after they discovered the high cost of the process in the United States. They say the clinic in Ukraine was extremely professional and that they are “forever grateful” to the team for baby Luke.

Mr Egan says he was relieved to see the Irish Government “step up to the plate” in supporting parents trying to get to Ukraine during the pandemic and urged policy makers to continue this support through the introduction of legislation. One year on from Luke’s birth, Kathy is still not legally recognised as his mother.