The total number of confirmed cases of Covid-19 in the State now stands at 24,112 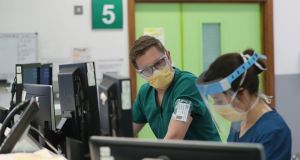 A further 10 deaths from Covid-19 have been reported to the Health Protection Surveillance Centre, bringing the total number of Covid-19 deaths in the Republic to 1,543.

The latest deaths were confirmed by the National Public Health Emergency Team in a statement on Sunday.

The statement said that as of 11am on Sunday, a total of 64 new coronavirus cases had also been confirmed. There is now a total of 24,112 confirmed cases of Covid-19 in the State.

Newly confirmed Covid-19 cases in the Republic had dropped below 100 for the first time in almost two months on Saturday, when a total of 92 new cases were reported to the Health Protection Surveillance Centre.

The latest figures come as some businesses and employers are preparing for the partial easing on Monday of restrictions on commercial and social activity that have been in force for two months to reduce the spread of Covid-19 in the Republic.

Hardware shops, garden centres, garages and bicycle-repair shops are among the premises reopening from Monday in the first phase of easing restrictions imposed due to the Covid-19 pandemic.

Taoiseach Leo Varadkar spoke to European Commission president Ursula von der Leyen on Sunday about the State’s plan for exiting lockdown. A Government statement said: “He briefed her on the careful, gradual steps Ireland is taking to reopen its economy.

“President von der Leyen set out her thinking on an EU recovery fund and on how the union’s budget can be mobilised to support sectors and regions affected by the crisis to build a greener, more resilient economy.

“The Taoiseach stressed the vital role the agriculture sector can play in this and the importance of a properly funded CAP [Common Agricultural Policy].

“He also expressed his support for a co-ordinated approach at EU level to lifting restrictions on travel.”

Meanwhile, the North’s Department of Health reported on Sunday that three more people have died in Northern Ireland from Covid-19, bringing the total number of fatalities there from the virus to 476.

The latest figures were published as Northern Ireland begins the easing of its lockdown restrictions. The easing takes force on Monday with the reopening of garden centres and council recycling facilities. Angling also will be allowed, while marriages where a partner has a terminal illness will be permitted.

The North, similar to the South, is following a five-stage relaxing of the regulations. However, unlike the Republic, the Northern Ireland Executive has not given specific dates for the move to each stage, rather insisting it will be guided by the science.

There is an expectation, however, that First Minister Arlene Foster and Deputy First Minister Michelle O’Neill will be able to announce a furthering softening of restrictions on Monday. This could include allowing people into churches for private prayer, a date for the reopening of golf clubs, and permitting groups of four to six people who do not share the same household to meet outdoors as long as they observe social distancing.Additional reporting: PA