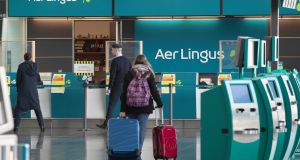 “The safety and security of Aer Lingus’s customers and crew is our top priority and any process changes that are identified as being required will be implemented as a matter of urgency.” Photograph: Colin Keegan/Collins Dublin

Aer Lingus is to conduct a review after pictures emerged of an almost full flight with no apparent evidence of social distancing measures.

The airline said any process changes required would be implemented as a “matter of urgency”.

The move came as pictures were shared from inside the cabin of a Belfast-London Heathrow flight on Monday morning, showing row after row filled with passengers.

“I would say there was about 95 per cent of the seats taken on the flight,” he said.

In a statement, Aer Lingus said: “In light of the unexpectedly high loads on the Belfast-London Heathrow service this morning and the level of demand for the route, Aer Lingus is reviewing its processes and procedures applicable to the operation of this service.

“The safety and security of Aer Lingus’s customers and crew is our top priority and any process changes that are identified as being required will be implemented as a matter of urgency.” – Press Association