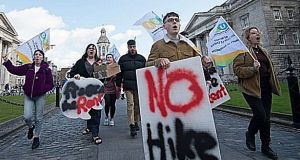 Dublin City University (DCU) has said it is reversing a plan to increase the cost of on-campus accommodation from September.

This follows a similar decision by Maynooth University which announced in late April it would reverse a proposed 3 per cent rent increase and introduce a freeze.

DCU president Prof Brian MacCraith confirmed that the planned 4 per cent rent rise would not go ahead in a video sent to students ahead of their upcoming end of semester assessments. Resit fees for exams will also be waived for any students resitting assessments in August or who need to postpone exams from May, he said.

DCU’s student union welcomed the university’s decision to reverse the planned increase which was announced prior to the Covid-19 pandemic.

Student protests were held at university campuses across Ireland in February after several institutions revealed plans to increase student-accommodation costs.

Minister for Education Joe McHugh criticised the University of Limerick (UL) last week in the Dáil for refusing to refund students for on-campus accommodation they had left due to the pandemic. The Minister appealed to UL to refund students as other universities had done.

A UL spokeswoman told The Irish Times the university’s governing authority is reviewing the matter of refunds, but no decision had yet been made about licence agreements for the coming semester.

Jim Miley, director general of the Irish Universities Association, warned on Sunday that the loss of foreign students attending Irish universities would be a “massive blow”.

Mr Miley said it was unclear how many foreign students would register. But with travel from China, India and the United States unlikely, the sector is expecting to be hit badly.

“We hope this will be temporary, that we could recover that critical business in two to three years. But in the meantime it is a massive blow to university finances” Mr Miley told RTÉ’s This Week programme.

Universities said last month they expected international student numbers will drop by about 80 per cent in the new academic year and result in the loss of hundreds of millions of euro. Irish universities have become increasingly reliant on revenue from international tuition fees due to a reduction in State investment per student over the past decade or so.

With unemployment increasing rapidly, Mr Miley said the need for “re-skilling and up-skilling would be greater than ever” once the State emerges from the pandemic.

“We saw in the financial crash that it was the level of the education of the workforce that was one of the ingredients that allowed us to come out of that crash faster,” he said. “We can be part of the solution in rebooting the economy but what’s critical is we need support if we’re to meet those challenges and be partners in the recovery with Government.”