Covid-19: Support group call for an end to the use of term ‘next of kin’ 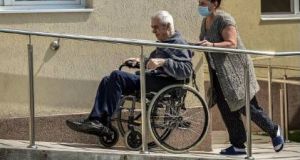 “During this national public health emergency it is important that the care of patients is not compromised, or the time of healthcare staff wasted, by unnecessary disputes about ‘next of kin’.” File photograph: Getty

The misunderstood term “next of kin” should cease being used in a health and social care setting, especially in the context of the Covid-19 crisis, according to a patient support group.

Sage Advocacy, a support and advocacy service for vulnerable adults, older people and healthcare patients, said people should be encouraged to designate who they want as emergency and healthcare contacts, but that the misunderstood term next of kin, should not be used.

Many people believe that being nominated as a “next of kin” confers an increased role for that person in terms of healthcare decisions, or even a patient’s assets, whereas really all it means is that the person is a point of contact, said Mervyn Taylor, executive director of Sage.

He said the group sometimes sees cases with families where there are divisions, or tensions, that some parties try to be declared next of kin, because of the false belief that it confers additional powers.

He said the misunderstandings associated with the term can also be shared by healthcare professionals.

Mr Taylor encouraged people, particularly those who are vulnerable, to designate an emergency contact, and also to inform healthcare staff who they would like information about their condition to be shared with. Often these are the same people, but sometimes they are not.

“During this national public health emergency it is important that the care of patients is not compromised, or the time of healthcare staff wasted, by unnecessary disputes about ‘next of kin’.

“Most of these disputes arise because there is a widespread belief that being a next of kin confers decision making authority with regard to healthcare decisions, or control of finances, in the event that a person loses the capacity to make decisions for themselves,” he said.

However, the phrase has no legal standing and is simply someone to be contacted in an emergency.

Continued use of the term is giving rise to concerns about safeguarding of vulnerable adults, often linked to divisions within families, he said.

A recent poll commissioned by Sage found that 57 per cent of respondents wrongly understood that if they lacked decision-making capacity, a ‘next of kin’ could make healthcare decisions for them. Almost a third believed a next of kin was entitled to access a person’s bank account and assets.

He said the HSE had a very good consent policy which makes clear what the role of a patient’s doctors and a patient’s family are, in the context of making medical decisions. However, there are healthcare professionals that believe that the phrase next of kin confers powers to the nominated person, when in fact that is not the case.