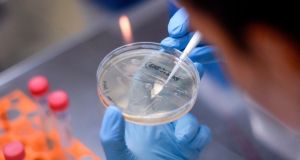 A researcher works on the development of a vaccine against Covid-19. File photograph: by Douglas Magno/AFP via Getty Images

Ireland has pledged €18 million to Gavi, the vaccine alliance, as part of an international effort that raised €7.3 billion to fund the search for a vaccine against Covid-19.

The Taoiseach Leo Varadkar made the announcement by video link to a EU/G20 organised event that was described by head of the European Commission Ursula von der Leyen as a sprint at the start of what will be a “marathon”.

Much more will be needed over the coming months, she said, during the three-hour event.

“I believe the fourth of May will mark a turning point in our fight against coronavirus because today the world is coming together,” Ms von der Leyen said at the start of the event, pledging €1 billion.

This is the message I sent to the EU/G20 video conference today on the efforts to find a #COVID_19 vaccine.

Ireland pledged €18m to GAVI, the vaccine alliance. The vaccine, if and when it comes, must be available to all countries of the world. pic.twitter.com/NHGNRogilv

Mr Varadkar said Ireland was pledging the money so that “the poorest countries in the world will have access to the Covid-19 vaccine if and when it is developed.”

He said the contribution would be part of the European Union’s comprehensive effort to combat the virus.

Ireland was also going to harness the capabilities of its research sector, universities and phamaceutical companies and will co-finance a public private partnership in immunology research, valued at up to €10 million over the next three years, he said.

The State had already given €60 million in direct or repurposed grants to enable the UN and other partners to respond rapidly to the situation on the ground, including €9.5 million given to the World Health Organisation, a fourfold increase in the usual contribution, he said.

The virus did not respect borders and was the shared enemy of all. “The only way to defeat it is to work together on a multilateral basis.”

Sooner or later a vaccine will be developed, as will medicines that treat Covid-19, and it was really important that “no-one in the world is left out when that happens,” the Taoiseach said.