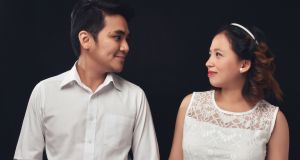 Andrea Maria Cruz with her husband, Rexter, on their wedding day.

A Filipino dialysis nurse working in Dublin has said she is “truly frightened” about giving birth to her first child alone in a foreign country after her husband’s visa application was put on hold because of Covid-19 arrangements.

Andrea Maria Cruz, who has been working as a nurse in Ireland since 2017, is due her baby on June 13th. She and her husband, Rexter, applied for a visa last year so he could join her in Ireland. The couple’s first application was refused because they were late submitting a document so they reapplied in January 2020 in the hope that Rexter would secure the visa before the child’s birth.

“Based on the wait my colleagues went through in applying for their partners, we thought it would take between two and six months so we sent in a letter explaining that I was due a baby,” Ms Cruz said.

She also sent a letter to the Irish Naturalisation and Immigration Service (Inis) from the National Maternity Hospital which recommended that her husband be granted a visa.

“This is Andrea’s first pregnancy,” the hospital wrote. “This pregnancy was not planned and Andrea moved jobs recently. This is a very stressful time for her.”

In late March, Ms Cruz learned the Department of Justice was putting all visa applications on hold for the foreseeable future in response to the spread of Covid-19. She hoped the immigration service would consider her situation as a “priority/emergency” case which could still be processed, and contacted immigration authorities numerous times seeking clarification.

For weeks Ms Cruz received automated answers and only after the department was contacted by this journalist for comment on her case did she receive a personalised email stating that her husband’s visa application was under review.

I never imagined I’d be away from my family at this time . . . it’s so overwhelming now. I feel helpless

Ms Cruz has recently stopped working after she discovered swelling in her left leg and was admitted to hospital for six days. The scan of her leg was inconclusive but she was advised to take leave in case of blood clots in her legs.

Ms Cruz said she had friends in Ireland but they all worked in healthcare so were extremely busy right now. “I never imagined I’d be away from my family at this time. I tried to be strong about the situation but when Covid happened, that’s when everything became real and it’s so overwhelming now. I feel helpless.”

She said she was jealous of new mothers who had spoken publicly about the challenge of limited visiting hours in maternity hospitals for partners during the pandemic.

“Just imagine me coming home with my newborn all by myself. I’ve already had to go through all the prenatal checks on my own and thinking about labour, getting into a cab to get to the hospital all without assistance. It’s not how I expected things would go.

“I hope they [immigration officials] can realise how frightening this is for me being a first time mother in a foreign land.”

A spokesman for the Department of Justice said he could not comment on individual cases and that measures put in place for visa processing were part of the national response to tackling Covid-19.

Emergency visas are processed only for a small cohort of people including healthcare professionals, elderly care professionals, immediate family members of Irish citizens, diplomats and military personnel, he clarified, adding that these measures would remain in place until at least May 5th.

He noted that visa services usually operated through Irish missions, honorary consuls and visa offices worldwide and that the reopening of these offices would depend on coronavirus measures adopted in different countries.