Mullaghmore would not be intimidated by bombing, commemoration told 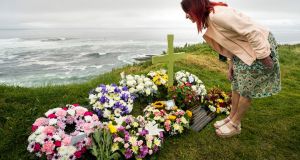 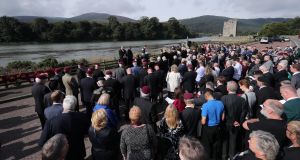 An inter-denominational prayer service is held at Narrow Water close to Warrenpoint in Co Down to mark the 40th anniversary of the death of 18 soldiers on August 27th, 1979. Photograph: Niall Carson/PA

The people of Mullaghmore would not be intimidated in the wake of a bomb 40 years ago that put the Co Sligo village on the map for the wrong reason. That was the clear message from an emotional ecumenical service on Tuesday for those who lost their lives when an IRA bomb ripped through a boat skippered by Lord Louis Mountbatten on August 27th, 1979.

Meanwhile, outside Warrenpoint, Co Down a commemoration service marked the anniversary of the killing of 18 soldiers by two IRA bombs, which occurred on the same date 40 years ago, one of the bloodiest days of the Troubles.

The wild waves of the Atlantic formed the mood music as a crowd of 250, gathered on the Sligo cliff top to remember Lord Louis Mountbatten (78) Paul Maxwell (15) Lady Brabourne (82) and Nicholas Knatchbull (14) who all died as a result of the explosion.

A soft summer rain bathed those who came, as Archdeacon Isaac Hanna from Drumcliffe told the crowd the “events of 40 years ago were hard to imagine as we look out over this scene and yet it speaks to us of innocent loss.

“This community stood with this family and the victims and all those affected to say this was not done in our name,” he said.

He added: “We stand with you and there is great comfort and strength from knowing that you have this support in this place at this time.”

“Through the midst of trouble, confusion and heartbreak the community here have shown their love for you. Fear can have a stifling effect on those who are coerced or intimidated in any way. Perhaps that was the intention on that day, but the opposite has been the effect,” he said.

The archdeacon added that fear could also be a healthy thing. “You and I know what it is like to grow up in a land where peace was something that we could not take for granted. But when peace did come, it came with relief, it was welcomed.”

Meanwhile, Paul Maxwell’s father John said it was a “very emotional day for the family but it was great to see so many people out here today in support.”

Recalling that fateful day in 1979, he said he was “sitting at my cottage when I heard the explosion and I kind of knew what it was as I knew where the boat would have been at that time.

“Paul loved the sailing and the people of Mullaghmore are terrific and I have a lot of time for them. I come back here quite a lot”.

He declined to comment on those who had carried out the atrocity.

Paul Maxwell’s mother Mary Hornsey said it was wonderful that the community organised the service. “It has helped us as it shows love and support for our family and we appreciate that.

She added: “I would ask the political leaders to think about the people and not their parties, doing what is best for the people”.

Meanwhile, at the service to mark the anniversary of the killing of 18 soldiers by two IRA bombs, at Narrow Water outside Warrenpoint, was told that those who come to remember should do so in peace.

As they passed the old Narrow Water castle ruins, IRA members remotely detonated the two bombs from a firing point across the Newry River in the Republic. There was also a 19th victim – Michael Hudson, who had been visiting the Republic from London, who was killed by army gunfire across the river following the blasts.

Around 200 gathered at the spot of the Narrow Water bombings on Tuesday for a service to mark the 40th anniversary. The Reverend Andrew Rawding told those gathered: “We are here today for peace. . . . We are standing here today because they and many members of her majesty’s armed forces were willing to put their lives on the line for peace,” he said. “Whatever anyone else might want to say, they might want to marginalise and stigmatise us, to politicise our pain, politicise our actions and say we were something else... No, I came here for peace, and we are here today for peace.

Former British army general Sir Mike Jackson was among the veterans who attended. He was one of the first to attend the scene of the atrocity on August 27th, 1979. Sir Mike was then a member of the Parachute Regiment serving in Northern Ireland. DUP MP Jeffrey Donaldson, DUP MLA Jim Wells and former UUP MLA Danny Kennedy were among the politicians who attended the service, which heard Tom Caughey, a survivor of the first blast, read out the names of his parachute regiment colleagues who had been killed.

Ben Higgins read out the names of the members of the Queen’s Own Highlanders who had also been killed in the IRA attack. Wreaths were laid at the scene. Speaking after the service, Graham Eve, a former member of the parachute regiment who was deployed to secure the scene after the bombs, urged Northern Ireland’s politicians to start working together and get devolved government restored. He said: “People ask you what it was like [at Narrow Water] – I could tell you what it was like, but you still wouldn’t have an idea of what it was like.

“In the moat house there was plastic cellophane bags which were clear, the smaller body parts that couldn’t be identified were put into those bags, and you’d think: ‘Whose finger is that? Whose thumb is that?’.”

Mr Eve added: “You grow older, you get grandchildren and you realise: ‘Hey, let’s put this behind us and move forward for the children’. Some of my colleagues might think differently, but I’m not bitter at all now.

“What I am bitter at now is the politics of the country and why we still haven’t got this sorted out. The Secretary of State should turn around to the politicians of this country and say: ‘Stormont will be open on Monday morning, you turn up you get paid, you don’t turn up you get sacked, and let’s take it from there and sort this bloody thing out’.

“Why are they still arguing? Why is there so much hatred? Put the orange away, put the green away, let’s move forward. Sort themselves out, it’s terrible and I am so annoyed by the politicians.

“I appreciate the history of the past, that’s the problem, it’s the past, let’s forget about the word ‘past’ and let’s move forward. Please. “I am not going to die a bitter man, I have no bitterness in me,” he said. – Additional reporting by PA