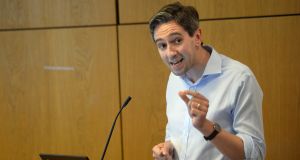 There is going to have to be a significant increase in pay for newly-appointed medical consultants in the future if the Government is going to insist that they can only treat public patients in State-funded hospitals, the Minster for Health Simon Harris has indicated.

Speaking on Tuesday he said he personally wanted to see only public patients in public hospitals. However he said he was not authorised to say that this was a Government position as Cabinet had not yet considered the review group report published earlier this week which set out how private medicine could be removed from public hospitals.

Mr Harris said the de Buitléir group report had shown how this could be achieved but that it would be costly and complex.

“Let me be clear, if we were to ask new recruits to do that (treat only public patients in public hospitals), we will have to significantly remunerate them and support them so we can keep them in our country.”

The de Buitléir group suggested a new salary of just over €180,000 for doctors opting for a public-only contract and it argued that this would compare favourably internationally. Medical organisations have privately indicated that a higher amount would be needed.

On Monday the Minister for Public Expenditure Paschal Donohoe said the costs involved in removing private practice from public hospitals would be significant and he did not give any guarantees that it would be implemented.

Mr Donohoe said the proposal would be considered carefully “in the context of all competing demands for investment within the health sector and the wider public sector”.

Asked about Mr Donohoe’s comments, Mr Harris said that he believed in universal healthcare. He said Ireland was “an outlier” in permitting a private patients to go into a public hospital and receive care ahead of a public patient.

Mr Harris said “many years ago a minister (Donogh O’Malley) believed in the concept of free education and he was told time and time again that he could not do and he did it”.

He said putting place such a system would take time and that “we cannot just click our fingers”.

Mr Harris said his first priority would be to sit down next month with hospital consultants and look at how to address immediate issues in relation to pay parity between those recruited after October 2012 on lower pay arrangements and more longer-serving colleagues.

He said he hoped to go to Cabinet before the end of the year on plans for the broader issue of ending private practice in public hospitals.

The Minister said the de Buitléir group had shown how private medicine could be removed from public hospitals over ten years.

He said he was a “little disappointed” that some vested interested had put statements out on Monday saying how this could not happen before they could possibly have read the de Buitléir report.

‘A lucky escape’: Coast Guard rescues woman stuck in sinkhole in sea for 90 minutes 07:34
Locals rally to help after GP’s surgery destroyed in fire ahead of vaccine arrival 01:00
Covid-19: Ireland could be ‘close to normal’ by end of year, says Dr Ronan Glynn 01:00
Calls for ‘robust action’ over offensive social media posts by prison staff 01:00
Plan to end direct provision by 2024 would see asylum seekers housed in State accommodation 01:00