Military representative body seeks to link up with ICTU 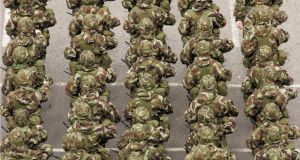 Many in the Defence Forces believe that because their representative organisations were not associated with the public service committee of Ictu in the talks that led to the current public service pay deal, they did not do as well as others across the public service. Photograph: Alan Betson

The organisation representing enlisted personnel in the Defence Forces has formally sought to link up with the Irish Congress of Trade Unions (Ictu).

It is understood that the Permanent Defence Force Other Ranks Representative Association (PDFORRA) has indicated that it wants to be involved with Ictu when its public service committee is negotiating future agreements on pay with the Government.

Informed sources said PDFORRA had indicated it was not interested in securing a right to strike.

Some sources said that PDFORRA had sought associate affiliation with Ictu earlier in the summer.

It is understood that the leadership of Ictu is expected to consider the issue at a meeting in mid September.

The move comes as military personnel have expressed unhappiness at a package of measures put forward by the Government during the summer to encourage staff retention in the Defence Forces following a report by the Public Service Pay Commission.

PDFORRA said in July that “while some of the recommendations made by the commission go some way towards meeting the terms of the submission made by our association, in other instances they fall considerably short”.