Report on forestry in Leitrim confirms dominant use of Sitka spruce 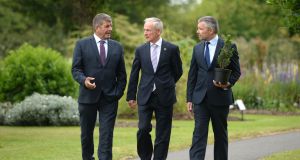 A report on the impact of forestry in Leitrim confirms the level of plantations in the county is the highest in the country, with Sitka spruce the dominant species.

It found the conifer accounted for 61 per cent of total forest area, and 75 per cent of forest owners are farmers.

The report was commissioned by Minister of State for Agriculture Andrew Doyle amid allegations that plantations there were over-reliant on conifers. The Save Leitrim group had claimed the State’s “relentless subsidised Sitka spruce afforestation programme” was not only causing widespread environmental problems but was undermining rural community life and fuelling depopulation.

The report, published on Monday, was completed by researchers at UCD School of Agriculture and Food Science led by Dr Áine Ní Dhubháin.

Forestry cover in Leitrim in 2017 was 18.9 per cent, “substantially higher than the national level of 11 per cent”, while native species accounted for 31 per cent of cover. The report notes Government policy is to expand national cover in the entire country, to achieve 18 per cent nationally by 2046.

In a series of surveys and interviews, the authors assessed social impacts. They noted “a strong divergence of opinion” relating to forestry as a land use, forestry’s role in the community and forest policy. A survey of forestry owners found:

75 per cent were farmers (full-time, part-time and retired);

Just over two-thirds of owners had planted forests on their own land;

26 per cent were investors (ie bought land/forest purposely for investment);

Just over 30 per cent of the forest owners were not resident in Co Leitrim.

The equivalent of 309 full-time jobs were associated with forestry/wood processing in Leitrim in 2017, worth €26.5 million in economic activity. The estimated overall percentage of farms in Co Leitrim, where the return from forestry was higher than that from agriculture, was 67 per cent, while its forests captured an estimated 12.6 tonnes of CO2.

On biodiversity, the reports says “forest owners reported sighting a variety of animal and bird species in their forest, most commonly rabbit/hares, badgers and pine martens”.

“Forests can have negative and positive effects on water quality,” it adds, but in 36 water bodies at risk of not meeting Water Framework Directive standards, agriculture (42.9 per cent) was the biggest threat, while forestry was at 14.3 per cent.

On environmental controls, the report concludes regulations are extensive, with a key element being stricter “setbacks” from housing, roads and waterways.

Mr Doyle thanked Dr Ní Dhubháin and her team for the report, which he said would be examined carefully by his department.

“The study will improve our understanding of the impacts of forestry in rural communities and in this regard will form an important part of the final review of the Forestry Programme 2014-2020.”

The Green Party said dependence on Sitka had to change. It was responding to comments from the industry representative group Forest Industries Ireland that Sitka would continue to be the “workhorse” of the sector, with short-rotation conifer plantations accounting for 70 per cent of new afforestation.

“We need our forestry sector to tackle both the biodiversity and the climate crises that we face. As we expand our level of forestation we need to change the whole model so that new plantations increase biodiversity, improve soil and water conditions, and help create vibrant local communities, as well as storing more carbon,” Green Party leader Eamon Ryan said.

“We need instead to switch to a more evolved forestry model which delivers a range of different benefits. It has to start with the development of a proper national land-use plan which promotes the growth of the right type of tree in the right place.”