State urged to ramp up protection of ‘inadequate’ sea habitats 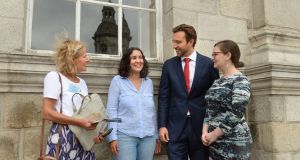 Ireland has designated just 2.3 per cent of its vast marine area for special protection, and yet most of its important sea habitats are “in inadequate or even bad condition”, an international conference in Dublin has been told.

The creation of marine protected areas (MPAs) is the critical mechanism to address biodiversity loss in our sea and coastal ecosystems, to end over-fishing and to counter accelerating impacts of global warming, according to Irish Wildlife Trust campaign officer Pádraic Fogarty.

Addressing the “Bigger and Better MPA” conference at Trinity College, he said Ireland had committed to designate 10 per cent of its seas as MPAs and to end over-fishing by 2020, “yet so far, we have protected only 2.3 per cent”.

Having a marine territory of some 400,000 km² – one of the biggest in Europe – brought a great responsibility to safeguard and restore precious habitats and species within this region and to end over-fishing, notably bottom trawling. “One proven way of doing that is by establishing well-designed and managed MPAs,” he said.

Green Party leader Eamon Ryan said fish populations did not recognise borders so a multilateral approach at EU level was required to ensure the right areas were protected. A national land-use plan to address the redirection of agriculture and how to use landscape to capture carbon should include the marine environment; both onshore and offshore.

Fianna Fáil environment spokesman Timmy Dooley said he was disturbed by the recent assessment by the National Parks and Wildlife Service (NPWS) which found almost all marine habitats were found to be inadequate or in bad condition with several species indigenous to Irish waters facing extinction.

These findings tied in with equally disturbing global analysis, he said.

“Ecosystems are rapidly declining and species at risk of extinction due to massive increases in production, excessive working of seas, land and soils, as well as the climate crisis and rising levels of pollution. It also highlights the extremely damaging impacts of wastewater, plastics and fertiliser use. And all of this is expected to intensify over coming decades.”

As an island nation with marine areas making up more than 90 per cent of our territory “we have both a moral obligation to protect and enhance the immense natural resources of our waters and ensure future generations will be able to enjoy them”, Mr Dooley added.

There were also clear legal obligations on the State to protect its ecosystems, he added, especially vulnerable deep-sea habitats. Applying sustainability criteria meant Irish fishery policy needed to be overhauled.

The recent NPWS report on the status of EU-listed habitats and species in Ireland showed more than 70 per cent of all Irish habitats are impacted by pressures relating to agricultural practices. While fisheries remain the most significant pressure offshore, their analysis found agriculture was one of the main threats to lake habitats, estuaries, and vegetation of flowing waters.

Karin Dubsky of Coastwatch, which hosted the conference with the wildlife trust, said there was a need to “address the loss of marine biodiversity and build a new marine policy where MPAs play a significant positive role”.

An agreement on trans-boundary lough protection and management was essential after Brexit, she said, including a commitment to explore the creation of trans-boundary MPAs for Lough Foyle and Carlingford Lough to protect these high-value ecosystems.