Four arrests for drink/drug driving, one investigation into sexual crime at festival 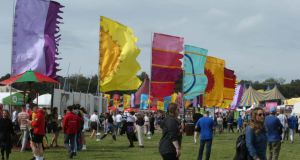 Among other incidents at the festival, a man was arrested for holding an offence weapon while leaving the car park. Photograph: Stephen Collins/Collins Photos

Two people were taken to hospital in a critical condition at the weekend because of drug and alcohol use during the Electric Picnic music festival, gardaí in Laois have reported.

The two patients, who were transferred to the Midland Regional Hospital in Portlaoise on separate occasions and both deemed “critical”, were resuscitated and have now been stabilised while their families are receiving support from liaison services.

Some 60,000 people descended upon the town of Stradbally this weekend to celebrate the annual music festival which has been held in Co Laois since 2003.

Among other incidents at the festival, a man was arrested for holding an offence weapon while leaving the car park. Further investigation found the man had two outstanding bench warrants, which are issued when a person fails to appear in court. The man in is currently in custody and awaiting a court appearing.

Some four arrests were made at the Stradbally festival for driving while under the influence of intoxicant – three of these related to drug driving. Local gardaí also reported six public order offences and 453 incidents related to drug offences. Gardaí say they had dealt with a total of 497 reported incidents associated with Electric Picnic by 10am on Monday.

Gardaí are also investigating a sexual crime which was reported during the festival and are continuing to provide support to the victim.

Local gardaí described the festival traffic plan as a success and said there had been minimal delays for motorists.