Junior Cert results due on October 4th after month-long delay 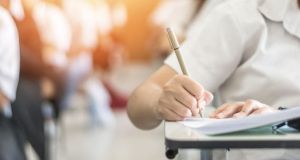 The commission said it had notified schools when the Leaving Cert appeals timeframe was reconfigured for the 2019 examinations that there would be an impact on the issue date for the Junior Cert results. Photograph: Getty

This year’s Junior Certificate results will not be available to students until October 4th, almost a month later than usual, due to extra time required for Leaving Cert rechecks.

The State Examinations Commission (SEC) announced the date in a statement on Monday, saying it had notified schools when the Leaving Cert appeals timeframe was reconfigured for the 2019 examinations that there would be an impact on the issue date for the Junior Cert results.

In a letter which accompanied the 2019 examination timetables, issued by the SEC to all second level schools in February, the commission advised schools that “as a result of the need to prioritise activities associated with the Leaving Certificate appeals, the results of the 2019 Junior Cycle examinations are due for issue to schools in late September”.

The commission said its “immediate priority” was to achieve the deadline of week ending September 20th it had set for issuing the results of the Leaving Certificate appeals, which was three weeks earlier this year than in previous years.

“The change to the issue date this year has presented the opportunity to change the day of issue from the traditional Wednesday to a Friday issue day. This has been requested of SEC from time to time and we have had agreement to this change of day from all of the stakeholders.”

The director of the National Association of Principals and Deputy Principals (NADP), Clive Byrne, said it “acknowledges the understandable disappointment that students and parents may feel” by the delay.

“However, we welcome the fact that clarity has now been brought to this issue, and in particular that the results will now be available on a Friday. Distributing results at the end of the school week will give students and schools additional time and space to assess their performance and allow teachers to give students any extra support they require.

“The NAPD is glad to see the prioritisation of the Leaving Certificate appeals process as the changes have gone some way in easing the stress placed on students as they seek to move on to third level.”

Ms Carter won her High Court case aimed at forcing the commission to rectify an error in the totting up of her Leaving Certificate marks before UCD closed its admissions for 2018.

The High Court ruled that the appeals process was highly unfair, not fit for purpose and caused untold stress to students.