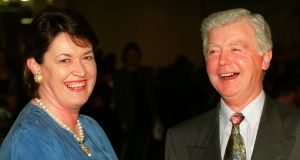 A descendant of Michael Collins has welcomed the announcement by Taoiseach, Micheál Martin that he is to hang a portrait of the Free State leader in his office beside a portrait of Fianna Fáil founder, Eamon De Valera.

Collins’ grandniece and former minister for justice Nora Owen said she believed it was an appropriate gesture by Mr Martin to hang a portrait of Collins beside De Valera, given Fianna Fáil and Fine Gael are now in government together.

“But whether we like it or not, they are both there now in government together so it makes some sense - I don’t see anything terribly amiss about Micheál Martin having portraits of both Collins and De Valera in his office.”

Immediately upon his return home to Cork after being elected Taoiseach, Mr Martin revealed Fine Gael leader and outgoing taoiseach Leo Varadkar had been about to remove a portrait of Collins from the Taoiseach’s office when he asked him to leave it there.

“Leo Varadkar said to me during the week that he was taking down the portrait of Michael Collins and I said ‘Well actually, you might put it back up and I’m going to put De Valera next to him in the Taoiseach’s office’,” said Mr Martin.

“I have a wonderful portrait of De Valera in my own office, the opposition office, and I am going to bring that over just to symbolise what has happened - Lemass is already there and we will find a place for a bust of Jack Lynch too.”

Ms Owen said she had no issue with portraits of both leaders, who had been close allies in the fight for Irish freedom but took opposite sides in the Civil War following disagreement over the Anglo Irish Treaty, hanging side by side in the Taoiseach’s office

“You could argue Micheál Martin is the one in pole position being Taoiseach so he could have put De Valera up on his own but I think it was quite an interesting gesture that he said ‘No, leave Michael Collins there and let the two of them watch over us’ as it were.”

Ms Owen, who served as a minister for justice in the 1994-1997 Rainbow Coalition of Fine Gael, Labour and Democratic Left, said Michael Collins might well have gone into coalition with Fianna Fáil at some stage if he had not been killed in the Civil War in August 1922.

“It may be that if Michael Collins, if he were alive, would have done the same thing if he found himself in this position,” said Ms Owen whose granduncle was killed during an ambush by the anti-Treaty IRA at Beal na mBláth during a visit to his native Cork.

Stressing she was speaking in a personal capacity and that other descendants of Michael Collins might hold different views, Ms Owen said that having both portraits was symbolic of both parties entering coalition together but she didn’t believe it would lead to any merger.

“I think Fianna Fáil and Fine Gael will remain separate parties and I don’t see any reason why we should merge - the way political systems work now in democracies, they are quite fragmented with several parties in some countries.

“We have several parties here in Ireland so I wouldn’t think Fianna Fáil and Fine Gael are going to become a single party by any manner or means but they have agreed to work together.”

Contacted by The Irish Times about the matter, De Valera’s grandson, Galway West Fianna Fáil TD, Éamon Ó Cuív said he saw no significance to Mr Martin’s decision to have a portrait of Collins hanging in the Taoiseach’s office beside one of his grandfather.

“And I don’t think both parties being in government during the centenary of the Civil War will change anything, I don’t think it’s of any significance whatsoever,” said Mr Ó Cuív who campaigned against Fianna Fáil going into coalition with Fine Gael and the Green Party.