The €500m development will include a 15-storey hotel, twin office blocks, and 300 apartments across five buildings 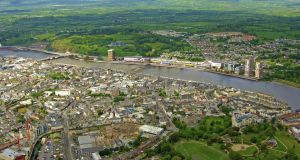 Waterford City and County Council has granted planning approval for a €500 million redevelopment of the city’s North Quays .

Falcon Real Estate Development Ireland, which is being backed by a Saudi Arabian company, expects there will be a combined €500 million private and public investment in the project over five years, and that thousands of jobs will be delivered during the construction phase and once it is complete.

The development, on an eight-hectare site, will include a 15-storey hotel and conference centre, twin blocks of office space rising to seven storeys, 300 apartments spread across five buildings of seven to 17 storeys in height and an open public space.

However, the site, which has Strategic Development Zone designation, requires about €100 million in State funding for infrastructure works for the project to go ahead, according to Falcon Real Estate. The remaining €400 million is coming from the developer.

Some of the Government funding would go towards relocating the nearby Plunkett train station east on to the quay. It would then become part of a transport hub catering for rail, buses, cyclists and pedestrians, with a link-bridge connecting the North Quays site to the city centre across the river Suir.

If the funding is delivered before the end of August, the developer believes works can begin on the site by Christmas.

Rob Cass, director of Falcon, said the development “redefines” the vision for the city.

“It kicks off a very exciting decade for Waterford and the southeast region as the delivery of North Quays sees the potential of the city-region start to be unlocked as a destination for people across Ireland and beyond to come and experience.”

Sinn Féin TD for Waterford David Cullinan said the planning approval was a significant milestone. “We now need to see delivery. Over to the Government to deliver their contribution,” he tweeted.