Work to resume on €1.7bn children’s hospital amid costs dispute 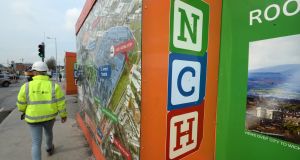 Taoiseach Micheál Martin said he was ‘angry’ over the work stoppage. ‘I would say people need to get back on site and start building the children’s hospital because the children of this country need it.’ Photograph: Dara Mac Dónaill

Work will resume on Monday at the €1.7 billion National Children’s Hospital despite a continuing dispute over extra costs which Government sources believe could run into tens of millions of euro.

The main contractor on the project, BAM Ireland, had not returned to work amid a row over the cost of resuming construction amid Covid-19 restrictions.

The company’s failure to resume work had led to the threat of legal action by the National Paediatric Hospital Development Board (NPHDB). It is understood that a letter issued to the company by the board contained an indicative timeline for the company to return to work on the site, and said that if the timeline was not complied with, legal action would follow.

BAM also came under intense political pressure on Friday, with Taoiseach Micheál Martin speaking of his “anger” and frustration over the work stoppage. “I would say people need to get back on site and start building the children’s hospital because the children of this country need it,” he said. “I’m angry about this and I think they should get back on the site.”

Speaking on Friday night, Minister for Health Stephen Donnelly said that “all options are on the table” when it came to addressing the dispute.

A stand-off over the project was due to a dispute over who would pay for the additional costs that arose through having to meet new public health guidelines on building sites. Government sources believe that demands made by BAM during the stand-off would add tens of millions to the project’s final cost.

The stalemate was broken on Friday night when BAM confirmed building work would get under way again from the beginning of next week “in good faith” and “following robust communication with the board and in the interest of completing the project as quickly and economically as possible”.

“Work will recommence with the safety of all stakeholders as the top priority and with full implementation of the Government’s mandatory Covid-19 restrictions. We look forward to a successful resumption and getting this vital project moving, notwithstanding all of the challenges that are not of our making,” said the company.

It is understood that the NPHDB now expects the issue to be referred to dispute-resolution mechanisms contained in the contract for the construction.

Earlier on Friday, BAM said it was “unfair” that it was not being offered compensation for the additional construction costs on foot of Covid-19 public health restrictions and that this needed to addressed urgently.

BAM had also said that the Government had agreed to make ex gratia payments to companies building other public projects.

However, it said no such compensation payments for the restrictions – which would allow fewer workers on site and lead to constructions delays – were being made in relation to the National Children’s Hospital, which is being built at the campus of St James’s Hospital in Dublin.

Highly placed sources said there were concerns within Government that the potential additional costs involved could run to “tens of millions of euro”. It is understood that the board overseeing the development of the hospital wrote to Mr Donnelly on the issue of delay in re-commencing work on the site on Thursday.

Mr Donnelly said last night that he had met the chairman of the board on Friday.

It is understood that contractors involved in other State building projects have received additional payments to deal with pressures caused by Covid-19, but that this would have to come from within the existing overall budget.

The Department of Public Expenditure on Friday night argued that the National Children’s Hospital project was different to other State building developments.

“Guidance for standard works projects was issued to contracting authorities setting out measures that they could consider to address the impact of Covid-19 on projects being delivered under the National Development Plan,” the department said.

“The Office of Government Procurement is not aware of the conditions that apply where non-standard forms of contract are used, and the form of contract used on the National Children’s Hospital is not a standard public works contract.”