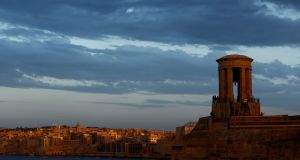 The businessman gave evidence that he left Ireland permanently about 2004 or 2005 and had spent time in Italy, Germany, France, Spain and Portugal putting tarmac on driveways. The commission heard he had spent most of the last 20 years in Malta (pictured), where he had set up a company. Photograph: Reuters

An Irish businessman based in Malta has successfully challenged a tax demand for almost €1 million from the Criminal Assets Bureau (Cab).

The married father-of-three, who runs a tarmacking business, now faces a tax bill of less than €100,000 following an appeal to the Tax Appeals Commission.

The man, a member of the Travelling community, disputed that he had any liability for tax in the Republic on the basis that he is a non-resident in Ireland as well as having no income or any trade or assets in the jurisdiction.

Tax Appeal Commissioner Conor Kennedy said he found the man was not present in Ireland for the requisite number of days in any given year to designate him as a resident for tax purposes. The commission ruled as a consequence that earnings from his international tarmacking business were not liable for tax in Ireland.

Mr Kennedy said the man should only be assessed for tax in relation to his trading activities in Ireland, cutting his income liable for tax to €294,800. The man told the commission that he left Ireland in 1995 to move to the US before subsequently living in Germany, France and Poland.

He gave evidence that he left Ireland permanently about 2004 or 2005 and had spent time in Italy, Germany, France, Spain and Portugal putting tarmac on residential and commercial driveways.

The commission heard he lived in caravans while travelling intermittently between campsites but that he had spent most of the last 20 years in Malta, where he had set up a company.

The man agreed that no country had knowledge of his overall earnings and that he dealt in cash and did not know how much he earned each year although he once recalled having €200,000 in cash on a table. The man said his accountant never asked for receipts as he knew he lived in a caravan where the storage space was limited.

He confirmed he had a caravan in Malta and a house in Ireland which he visited for Christmas, St Patrick’s weekend and the Ballinasloe Horse Fair. The commission heard he also had a site in Leitrim and houses in Northern Ireland and Portugal.

The man said he would typically do 20 “deals” when back in Ireland in relation to the sale of cars, rollers, vans and horses but later reduced the number of deals to between six and eight. He also acknowledged that he had bank accounts in the Republic and Northern Ireland to pay bills.

The man accepted that his company’s Maltese tax returns were filed retrospectively after he had been visited by gardaí. The commission also heard he had a conviction for conspiracy from a court in Northern Ireland in 2014.

Mr Kennedy said the man’s ambulatory lifestyle and commercial activities did not support his assertion that he was resident in Malta.

The commissioner ruled that the “deals” conducted while he was back in Ireland for Christmas and the Ballinasloe Horse Fair were chargeable for tax as well as about €80,000 in profit made from the sale of a house in 2006.