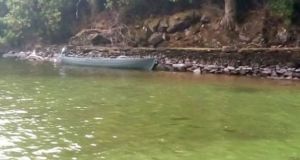 The entire sewer network in Killarney, Co Kerry, is to be investigated in response to a major blockage that led to sewage backing up and flowing into a river last year.

Irish Water and the Environmental Protection Agency (EPA) said the “significant” blockage on April 30th of last year was in the main caused by a piece of timber and exacerbated by fats, oils grease and baby wipes building up in an overflow chamber linked to the main sewer.

The incident, which occurred between Woodlawn and Muckross, led to the main public sewer backing up and sewage entering the river Flesk near Lough Leane without passing through the local water treatment plant.

Warnings about toxic algal scum have been erected on the lake shore in recent weeks after the death of a dog from suspected poisoning encountered along the Deenagh river, a major tributary of Lough Leane, which is the largest of Killarney’s lakes.

Kerry County Council said blue-green algae had been detected and the signs were a precautionary measure. However, Irish Water and the council both insisted the Killarney waste water treatment plan was working well.

The EPA sent an inspector to the site of the blockage and it later raised a concern about the wider sewer network in Killarney. It issued Irish Water with instructions after discovering there was no screen at the storm water chamber/sump near the Flesk.

The “series of requirements” posed by the EPA to Irish Water included to establish if there were any other storm water chambers/sumps in Co Kerry similar to that which saw the discharges into the river and to “ensure that they are part of a proactive inspection and maintenance programme”.

Irish Water have also been told to carry out a cleaning programme and install “high-level alarms” in the storm water chamber concerned.

Irish Water said the Killarney treatment plant was “operating in full compliance with its wastewater discharge licence and other environmental regulations”.

It said no overflow issues had been reported recently in the area and that the operation of all sewers was monitored on an ongoing basis. It asked to public to contact it should any overflows be seen.

“Irish Water, working in partnership with Kerry County Council, has commenced a project, which includes surveying the condition of the existing sewer network in Killarney as part of a longer-term project to determine what future investment is required to improve their operational functionality,” the utility firm said.

Irish Water added that this was the first time surveys of this scale were being carried out and that they will allow Irish Water to assess the capacity, condition and performance level of the sewer network.

The latest EPA survey of the lakes of Killarney, which was carried out between 2016 and last year, found the overall water quality in the three lakes was moderate to good.