Planned strike by 10,000 support staff to have significant impact on services, says HSE

HSE support workers, members of the SIPTU Trade union from 38 hospitals and healthcare facilities are striking over what they claim is the government’s failure to ‘meaningfully engage’ with pay restoration talks. Video: Bryan O'Brien / David Raleigh 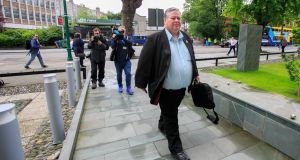 A planned strike by 10,000 healthcare support staff is to go ahead on Wednesday and the HSE expects it will have a significant impact on services in 38 hospitals across the State.

The action is to take place after talks between health service management and Siptu at the Workplace Relations Commission (WRC) failed to end with a resolution to a dispute about pay for workers such as healthcare assistants, laboratory aides, chefs and porters.

Patients are being contacted by their local hospitals or healthcare facilities in cases where a scheduled procedure or service will be affected.

A spokeswoman for the Minister for Finance, Public Expenditure and Reform, Paschal Donohoe said the strike’s consequences would be “extremely disruptive and distressing” for many patients.

The strike will cause the deferral of some elective inpatient procedures, significant cancellations of scope procedures, reduced outpatient services, reduced laboratory services for GPs, reduced catering services for both patients and staff, and reduced operating theatre activity, the HSE said.

The services impacted will vary across the hospital sites, it added.

“While every effort will be made to minimise impact on patients, industrial action involving these essential staff will have a significant impact,” the HSE said.

Siptu health divisional organiser Paul Bell said the trade union would prefer a negotiated settlement that did not impact on patient services.

“Unfortunately, we have run out of time and too many issues remain unresolved. Siptu members have acted in good faith at all times during this dispute including by deferring two days of strike action,” he said.

“We believe that the Government has abused the conciliation process and never meaningfully engaged with Siptu representatives.”

A 24-hour stoppage scheduled for last week was deferred to allow for talks between Siptu and the HSE at the at the Workplace Relations Commission (WRC). Those talks began last Thursday and concluded yesterday without agreement.

Mr Donohoe’s spokeswoman said the Government has constructively and positively engaged to try to resolve the dispute and made a significant offer last Friday. This “decent and fair offer” was sufficient for Siptu to call off its strike planned for last week , she said.

The employer has offered to refer the dispute to the Labour Court for a binding outcome, but regrettably “this too has been refused”, the spokeswoman added.

The dispute centres on what Siptu described as a failure of the Government to implement the findings of a job evaluation scheme for healthcare support staff which could see some staff receive increases of € 1,500-€3,000 a year.

Senior Government sources suggested it was prepared to pay about one third of the job evaluation award next year with the balance in 2021 and 2022.

The source said meeting Siptu’s demand would represent a 7 per cent pay rise for the staff concerned next year in addition to increases under the general pay round and the extra remuneration provided by Government to recent entrants to the public service.

Mr Bell said some €16.2 million was owed to his members yet the Department of Public Expenditure and Reform had only offered €1.2 million.

“A 24 hour strike, involving up to 10,000 support staff, will go ahead from 8am on Wednesday as our members continue to pursue their legitimate claim for recognition, respect, and pay justice.”

Services in almost all of the State’s hospitals will be affected as a consequence of the strike, which a spokeswoman for the Department of Health said “has the potential to have serious impact on patients” .

“There is an onus on Siptu to re-engage with the industrial relations machinery,” she said.