Developer of defective apartments proposes family members for board

Sherborough Enterprises wants to replace only private owner on the board 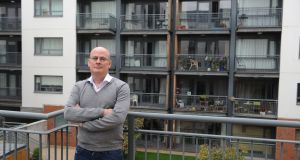 Cearbhall Beggan, the only private owner and volunteer director on the board of the Cathedral Court OMC. Photograph: Aidan Crawley

The developer of a Dublin 8 apartment block with serious building defects has proposed that hotelier Noel O’Callaghan and his son Charles O’Callaghan replace the only private owner on the board of the owners’ management company (OMC).

The Irish Times recently revealed that Sherborough Enterprises, a development company controlled by members of the family that owns the O’Callaghan hotel group, expects apartment owners at Cathedral Court in Dublin 8 to pay more than €5,000 each to repair building defects in an apartment block that it built and still partly owns.

A building surveyor’s report found problems with a large number of balconies at the site in 2016, while a fire-safety survey last year also found shortcomings.

Cearbhall Beggan is the only private owner and volunteer director on the board of the Cathedral Court OMC; the only other director is Paul O’Callaghan, son of Noel and director of Sherborough.

Mr Beggan has continuously questioned the rationale behind charging private owners for the remediation work rather than pursuing the developer first, but his efforts have been stymied by Sherborough, which still owns a majority of apartments in the block and so retains a majority vote on the board of the OMC.

In April 2019, Mr Beggan was chairman of an extraordinary general meeting where he blocked a vote that would introduce a €5,300 defects levy on every apartment owner.

It was only after this egm was held, when both votes were blocked, that Sherborough requested Mr Beggan be removed from the board of the OMC.

In a letter, issued to all owners on May 16th last, the company said it wished to “express our complete displeasure with the performance of the board of the OMC for Cathedral Court” and that “we feel our rights as a member of the OMC are being suppressed”.

Paul O’Callaghan also recently wrote to the solicitor appointed to represent the OMC telling him that he will seek to have him removed as the appointed solicitor.

Mr O’Callaghan also told solicitor William Brennan that Sherborough would not agree to mediation in order to try to resolve the issue.

Mr Beggan told The Irish Times that “after years of showing little interest here, no fewer than three of the O’Callaghan family have nominated themselves to join the OMC board”.

He raised concerns about the contacts the company had made with the solicitor for the OMC and also about the developer’s role within the OMC.

On June 4th a letter was sent to owners notifying them of an egm where they would be asked to vote on removing Mr Beggan from the board of the OMC and electing new directors.

The Irish Times understands that Sherborough has nominated Noel and Charles O’Callaghan, while four private owners have also put their names forward in order to represent the interests of ordinary apartment owners.

Sherborough was contacted for comment by The Irish Times but did not respond.

There will be a vote on these special resolutions at the egm on Tuesday, June 25th.

Noel O’Callaghan is head of The O’Callaghan Collection, a hotel group that includes The Alex, The Green, The Davenport and The Mont hotels in Dublin as well as the Tamburlaine in Cambridge and The Eliott in Gibraltar.