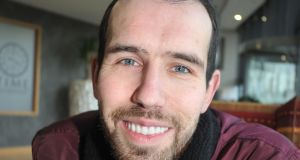 Michael Sheridan with dentures as he awaits implants in April.

A man has had 27 teeth which had rotted because of an addiction to fizzy drinks surgically removed by a concerned dentist.

Michael Sheridan (32) from Ashbourne, Co Meath, had been in constant pain for much of the last decade and has lived on a diet of yoghurt, Weetabix and soup because he could not chew solid food. He said he drank at least six litres of fizzy drinks each day.

Dr David Murnaghan, a dentist from Navan who met Mr Sheridan through a shared interest in water polo, was so concerned about his oral health that he offered him free implant treatment.

“I knew his teeth meant a serious threat to his health. He couldn’t chew his food properly, he couldn’t bite into a sandwich like most people and he is in pain every day,” said Dr Murnaghan.

“The Government is not pushing that side of health education currently, it’s more about alcohol and smoking, but oral health is very, very important and many Irish people don’t go to the dentist enough for regular checks.”

Mr Sheridan, who has three children, is due to get married next New Year’s Eve and wanted to be able to smile confidently in the photographs.

“I used to keep my teeth hidden and talk as little as possible to people. If I was out with friends, I’d sit further back when talking because I was conscious of my bad breath,” Mr Sheridan said

“The kids in the family started noticing my teeth so I went back into my shell even further.”

He said he could survive on just one meal a day because his appetite was suppressed by the amount of sugary drinks he was consuming.

“I was addicted to them. I’d drink six litres or more a day – whatever I could get my hands on. I always had a bottle of minerals in my hand.”

He said he had all 27 teeth surgically removed in one sitting last week. “I was two hours in the chair under local anaesthetic. It was uncomfortable but not that painful. I’ve been walking around in constant pain for 10 years, so this was nothing,” he said.

After the procedure, Dr Murnaghan inserted dentures to give Mr Sheridan’s gums time to heal and in April, he will insert 12 implants into his jawbone. Bridges will be applied at a later date. Dr Murnaghan waived the fee, which could normally have been up to €50,000, on one condition – that Mr Sheridan give up fizzy drinks for good.