Lean Kennedy, an advocacy and policy co-ordinator with Irish Guide Dogs for the Blind, makes her way through Dublin city centre with her dog Higgins. 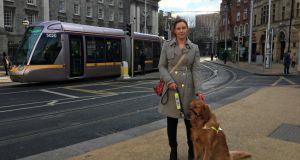 Léan Kennedy with her dog, Higgins: “You’re really relying on your wits to know when it’s safe to cross.”

It was like a scene from a bad B movie. A blind woman and her golden retriever guide dog waited to cross the street at Dublin’s College Green as a line of 11-tonne Dublin Bus double deckers headed in her direction.

Cyclists weaved in and out, as stressed-looking car drivers tried to avoid them and the buses. At the crowded crossing pedestrians itched for a green light like racehorses at the off.

Through it all, blind/visually impaired Léan Kennedy and her dog Higgins waited for the audible signal at the lights to beep, indicating she could cross. She could not hear it above the traffic. No one could hear it.

Would she cross, regardless? Unaware of the danger, would she take a chance and walk out into the maelstrom of traffic with inevitable consequences?

By then, both myself and colleague/videographer Kathleen were in a state of high anxiety. We had accompanied Kennedy and her dog from St Stephen’s Green, down Grafton Street, to the crossing opposite Trinity College at College Green.

Our intention was to see, objectively, how a blind/visually impaired person would navigate that part of Dublin city centre.

We had met Kennedy at the St Stephen’s Green shopping centre. Crossing the Luas tracks to an island there, and then to the Green itself, meant we had no alternative. A sign across from the middle island reads: “Look both ways”.

The information was useless to her. And when she crossed to the middle island she was marooned. There was no audible signal at that point to indicate when she might cross safely. We had to tell her.

It was similar when crossing back from the Green to Grafton Street. Crossing College Green to the Bank of Ireland and back was equivalent, probably, to navigating a river of hungry crocodiles.

Kennedy is the Cork-based advocacy and policy co-ordinator for Irish Guide Dogs and travels to Dublin frequently for meetings. Higgins is her guide dog for the past two years “... and I’m first lady,” she said. Without him she could not work or live independently.

Blind in one eye with three per cent vision in the other, her sight began to fail due to a hereditary condition when she was 13. She attended UCC, where she took a degree in English and psychology before her sight had deteriorated to such an extent she needed a cane.

Then it was decided she needed a guide dog. Higgins is her third since 2005.

As she pointed out while marooned on the Stephen’s Green island: “It’s an uncontrolled crossing [with no audible signal]. So you’re really relying on your wits to know when it’s safe to cross.

“These uncontrolled crossings with the Luas are quite frequent around Dublin city now and it’s creating a lot of uncertainty and stress for people who are visually impaired because they feel they have no way of knowing when it is safe to cross over the tram line,” she said.

She also had been “contacted this week by a person to say that audible signals on College Green area have been turned off. How are we meant to negotiate these streets not knowing it’s safe to get across?” she asked.

“We need controlled crossings. When the kerb is taken away at a pedestrian crossing to facilitate people who use wheelchairs the agreement was that blistered tactile paving would be put down to direct someone who was blind or visually impaired so that they know they are about to cross on to a roadway, and the crossing is controlled because they have a signal-controlled button that they can push and that would bleep indicating to the person that they can cross,” she said.

“Some also have a vibrating button so anyone who has a hearing impairment can put their hands on it and go by the vibrations to know when it is safe to cross the road as well. These should be at each crossing in the city where possible,” she said.

“The control signal needs to be bleeping all the time and at a suitable volume so that it can be heard above traffic. When it is not bleeping it is very difficult for someone who is blind/vision impaired to even locate it,” she said.

Irish Guide Dogs was “calling for an inclusive mobility committee to be set up so that advocates who represent people dealing with blindness, hearing impairment, intellectual and physical issues, and so on, can all come together and agree on standards which will be implemented across the country so we can avoid concerns we have with pedestrianised areas such as College Green,” she said.

Remarkably, throughout our city centre walk Kennedy and Higgins remained completely calm. We, who accompanied them and could see, were not.

A spokesman for Dublin City Council said all of these crossings were installed or upgraded by Transport Infrastructure Ireland (TII) as part of the Luas cross city works and were required by Dublin City Council (DCC) to meet required standards for pedestrian crossings and tram ways. “Prior to Christmas DCC inspected all pedestrian crossings on the Luas LCC line to ensure that the facilities for visually impaired users were working correctly prior to hand over of the signals from DCC to TII.”

He said a complaint was received from a member of the public on Tuesday, concerning the levels of the audios at College Green. “A maintenance contractor visited site that same day and made some adjustments in the audio levels.”

He said any issues with audio settings or operation of crossings can be reported to DCC’s control centre on 1800-293949, and they “will have a maintenance contractor visit site to rectify any issues that are reported”.

A spokesperson for the Luas was not available for comment.

Astronaut Chris Hadfield offers to ‘talk space’ with Adam from the Toy Show 11:00
Man dies after part of a building collapses in Tralee 10:57
Man arrested over murder of mother and her two children 10:02
Man in his 60s dies in Co Roscommon house fire 09:05
Problem of maintenance persists 25 years after divorce introduced 06:00

1 Ireland in precarious position as third Covid-19 wave could be more deadly, Nphet warns
2 Man arrested over murder of mother and her two children
3 Covid crisis: Republic to move back to Level 3 as shops open from Tuesday
4 Astronaut Chris Hadfield offers to ‘talk space’ with Adam from the Toy Show
5 Ex-barrister Patrick Russell conned people out of more than €12m, gardaí say
Real news has value SUBSCRIBE