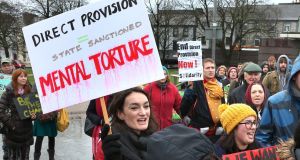 Criticism of the Government’s “minimalist” approach to removing the State’s absolute ban on asylum seekers working was voiced at a rally in Galway on Saturday.

“Unless we describe it as what it is – internment, and a form of open prison – people will not realise how unjust it is,” Ms D’Arcy said.

“Many caught in this system of internment are too frightened to speak out, as we outside don’t speak loudly enough,” Ms D’Arcy said, urging people to lobby their politicians over the conditions of people caught in the system.

Zimbabwean national Obert Makaza, who works as a direct provision support worker with Galway City Partnership, said that the Government must follow up on its acknowledgement that the system was “not working”.

“If the right to work for asylum seekers is not unconstitutional, why is the Government taking so long to explain what it means,” he said, referring to the response to last year’s Supreme Court ruling.

Last week, just three weeks before a February 9th deadline when the Supreme Court will declare the ban preventing asylum seekers from working as unconstitutional, Minister for Justice Charlie Flanagan announced that the Government was proposing to opt into the EU (recast) Reception Conditions Directive.

However, NGOs say the vast majority of asylum seekers will not be able to access jobs because of the requirement under the directive for employers to have an annual financial turnover of €30,000 and a requirement on them to show evidence that they advertised and were unable to find an EU citizen for the post among other conditions.

Mr Makaza said that his native Zimbabwe had benefited from the energy brought by migrants, and Ireland could benefit likewise.

Independent senator Trevor Ó Clochartaigh said that the Government’s “right to work” proposal should be renamed the “right not to work” measure, as it was “designed to ensure people don’t have access to work” but that it “ticks the boxes for the Supreme Court”.

Mr Ó Clochartaigh also said the system of direct provision was “working for the State”, because it appeared that officials in the Department of Justice wanted to “make it so bad that no one in their right might would come to Ireland”.

A number of residents in Galway city’s two direct provision centres participated in the march from Salthill’s Eglinton centre to the Great Western hostel in Eyre Square.

One of the Eglinton residents, who said she could not give her name in case her asylum application was jeopardised, described how some residents had been there for up to 11 years.

“People are dying inside,”she said. She related the reality of sharing a bedroom with two other women, one of whom has mental health issues, and said that many people were on medication to help them cope.

“There should be a six-month system of assessment – leaving people without a decision for five or 11 years is not good, not kind,”she said.

Among those supporting the march were Galway residents Séamus Diskin and Mary Cunningham. Ms Cunningham, a teacher, said that she saw at first hand the impact that direct provision had on young school pupils, and for this reason she felt she had to attend.

Mr Diskin said he was particularly concerned about the conditions in which families were forced to live, and the fact that full access to education was impossible. He said he had taught Maths to a number of students who could not proceed beyond the NUI Galway access course, due to the prohibitive cost of being a non-national.

Mr Diskin called on NUI Galway to follow the precedent set by Dublin City University and University of Limerick in becoming “universities of sanctuary” which offer scholarships to asylum seekers.