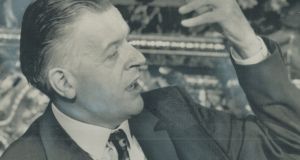 James Cross tells a news conference in London about his ordeal in 1970. Photograph: Jeff Goode/Toronto Star via Getty Images

An Irish man who witnessed his own death being announced on television 50 years ago has died with Covid-19 at the age of 99.

James Cross, who was from Nenagh, Co Tipperary, was a central figure in the October Crisis in 1970, one of the gravest political and constitutional moments in Canada’s history.

He was working as a British diplomat when he was captured by militant Quebecois separatists and held for 59 days.

Police had feared the worst when a Quebec minister, who was captured about the same time, was found dead in the trunk of a car.

When another body was discovered, the Canadian media assumed it was Mr Cross, and announced his death while he was watching television with his back to his captors.

“I feared my wife would be watching at home,” he told the world’s media on his release.

Mr Cross was born on September 29th, 1921, but his mother died in childbirth. He grew up on a 100-acre farm and said of that time many years later: “Nobody starved, but there were no luxuries.”

He went to Trinity College Dublin and got a first-class degree in economics and political science. He later joined the Royal Engineers and spent the second World War in Palestine.

He was almost killed in 1946 as he was in Jerusalem’s King David Hotel when the Stern Gang blew it up in an incident that killed 100 people.

After leaving the British army in 1947, he joined the British Board of Trade, which promotes British exports. It was in that capacity he found himself in Quebec at a time when the region’s separatist movement was at its height.

He was kidnapped from his Montreal home on October 5th, 1970. His captors, the Front de libération du Québec (FLQ), a left-wing, separatist organisation, also kidnapped the Quebec minister for labour Pierre Laporte.

The kidnappings were a profound shock to a country noted for its tranquility, and the then prime minister Pierre Elliott Trudeau – his son Justin is Canada’s current prime minister – in response invoked the War Measures Act, which was effectively martial law.

The FLQ had a lot of support in Quebec, especially in the universities. The National Post described the October Crisis as a “singular moment, the greatest crisis of identity in two centuries, since the British defeated the French on the Plains of Abraham, the high ground of Canadian national myth”.

In capturing Mr Cross, the FLQ said it wished to deal a blow against “Anglo-Saxon imperialism”, not knowing that, although Mr Cross was working as a British diplomat, he was actually Irish.

A photograph taken by the FLQ of Mr Cross playing solitaire is among the best-known photos in Canadian history, representing the moment when Quebec appeared to be teetering on the brink of insurrection.

The FLQ agreed to release Mr Cross in December 1970 in return for safe passage of some of its members to Cuba.

He returned to Britain after his release, gave an interview at the airport and resumed his career as a civil servant. He never served abroad again.

He retired to Seaford on England’s southern coast.

He outlived both his wife and daughter. He died on January 6th from complications arising from Covid-19, according to his son-in-law John Stringer.