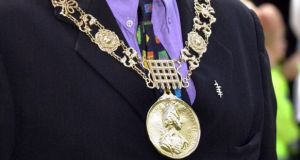 Minister of State for Local Government Peter Burke is expected to seek Government approval for the drafting of legislation that will allow for an election to take place in Limerick later this year.

Limerick is to get a high-profile directly elected mayor and local authorities elsewhere will be able to hold public votes on whether they should have one too under proposals to be considered by Cabinet on Tuesday.

Minister of State for Local Government Peter Burke is expected to seek Government approval for the drafting of legislation that will allow for an election to take place in Limerick later this year.

There are also plans for other local authorities that want to have directly elected mayors to be able to hold plebiscites on creating such a role in their area.

The planned legislation comes after the successful May 2019 plebiscite in Limerick that saw people vote in favour of creating the office there.

Similar proposals in Cork and Waterford were defeated.

An election for mayor of Limerick City and County Council could be held as early as October.

While directly elected mayors have long been a feature of how cities in the US and the UK are run, the successful candidate in Limerick will be a first for the State.

An implementation advisory group chaired by former senior civil servant Tim O’Connor was set up following the 2019 votes to advise on the possible powers for the new mayor in Limerick.

Recommendations include a role for the mayor in developing housing strategy and proposing the local authority’s development plan as well as the delivery of Project Ireland 2040 infrastructure plans and taking a lead in transport strategy. The mayor would chair the area’s joint policing committee.

They would also have to be consulted on national issues affecting Limerick such as the rollout of Sláintecare and policies relating to tourism and education.

Government departments are being consulted on the proposals for increased autonomy for the new directly elected mayor.

The planned legislation is to include provisions for the holding of the election if Covid-19 restrictions are still in place.

It is understood that the holding of the vote will depend on public health advice at the time.

Other local authorities will be able to hold plebiscites in their areas on whether or not to have a directly elected mayor under the proposals to be brought to Government.

This is in line with a commitment in the Programme for Government to allow for such votes to be held in 2024.

Local authorities would be able to request that a plebiscite takes place.

Alternatively demand could be demonstrated by a petition from 20 per cent of registered voters.

Mr Burke – who is to brief Cabinet on Tuesday – has previously described the planned legislation as “the biggest reform of local government since the foundation of our State”.

There was speculation at the weekend about who may be interested in entering the race to become mayor of Limerick.

Limerick City TD Willie O’Dea told the Sunday Times he is not interested in the job.