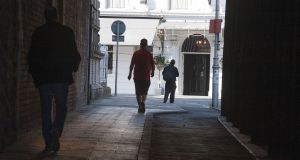 Almost a quarter of people in Dublin’s northeast inner city have experienced drug-related intimidation, and over 80 per cent see it as an issue, but less than one in five would report it, a study published on Tuesday finds.

The report, Debts, Threats, Distress and Hope: Towards Understanding Drug-Related Intimidation in Dublin’s North East Inner City, paints a bleak picture of the complexity and all-pervasiveness of the drug culture, affecting the entire community whether people are connected with the trade or not.

The area, which has a population of over 45,000, stretches from the old docks areas around East and North Wall, into Sean McDermott Street, Summerhill, North Strand, Ballybough and Mountjoy Square, as well as Parnell and O’Connell Streets and the IFSC. It has been at the centre of recent gang wars and the scene of several high-profile murders.

Open dealing and low-level intimidation are normal, says the report, making the area feel unsafe and causing people to change their routines, avoid areas, stop letting children play outdoors, and to withdraw and cut off contacts with others in their community.

It has a “chilling effect” on people’s willingness to report antisocial behaviour.

The detailed, 120-page report comes from the Drug-Related Intimidation Initiative (DRII) which is operated and managed by the Ana Liffey Drug Project, and draws on in-depth literature reviews and field research including an online survey of almost 500 people living or working in the area, focus groups and interviews with people with direct personal experience of drug-related intimidation (DRI) as victim, witness or previous perpetrator.

In all, 83 per cent of online respondents were “aware of DRI as an issue in the area” and 23 per cent had experienced intimidation.

Reasons for intimidation included to pressurise payment of a debt or a loved one’s debt; to “discipline” a person for “interfering” in a dealer’s activities by reporting incidents, or for even being suspected of informing or “ratting” to authorities.

Parents whose children owe money faced threats against their son or daughter. “They’re actually afraid that their children will be shot or murdered or found somewhere beaten up or left half alive like. We all know the reality of this sort of stuff,” said another.

Young people had to borrow to pay off debts or could be coerced into “working off” debt by holding or carrying drugs or into prostitution.

Participants speculated young people were let run up significant drug debts to then be forced to “work” for dealers.

Over a third (41 per cent) described the northeast inner city as “unsafe” or “very unsafe”. There was a sense of a once-strong and close-knit community breaking down.

“Vandalism and destruction of community facilities” by dealers seeking to destroy CCTV equipment and intimidate communities were noted, while “young people may be reluctant to engage in their community and local services” due to their fear of “open drug-dealing”.

Underlining the issue’s complexities, many noted the drugs trade had become “entrenched in the economic survival of the community”. It provided “jobs”, said one, and incomes to young people who saw few opportunities elsewhere.

A community co-ordinator said among the underlying reasons were “generations of neglect of a community” and “people being very powerless”.

Local recommendations include provision of safe spaces to empower residents to address DRI.

The question of whether “the current regulatory framework under which substances are controlled is fit for purpose” must be considered, it notes.